The echolocation calls of a big brown bat (top) and eastern Eastern red bat (bottom) recorded in Columbus, IN, during summer surveys in 2021.

Acoustic bat surveys were developed as a non-invasive method to monitor the statewide distribution and relative abundance of bat populations in their summer range. Bats maneuver through their environment and detect prey using echolocation, a process in which they emit ultrasonic sound waves and listen for the echo to return. Advances in technology have resulted in equipment that can record echolocation calls which can then be used to identify different bat species by their unique echolocation signatures.

Project personnel use an ultrasonic bat detector and vehicle-mounted microphone to record echolocation calls emitted by bats in the environment. Surveyors drive a predetermined route (15–25 miles in length) shortly after sunset when bats become active. Surveys are conducted two times in each area across a six-week survey period that begins in June and ends in mid-July. The same routes are surveyed each summer, allowing biologists to monitor multiple species of bats through time and across the state.

Want to see where DNR has surveyed and what bat species were detected across the state? Check out the results from past sampling.

Wildlife Science staff oversee numerous projects with decades of invaluable data that are used to understand population trends of nongame and endangered species or groups. The Mobile Acoustic Bat Survey Program has collected nearly 10 years of data that verify the substantial impacts of white-nose syndrome on bat populations during the 2010s. These data also provide vital information in the ongoing management and conservation efforts to preserve one of the state's most valuable resources.

A mobile acoustic survey setup has an ultrasonic microphone attached to the roof of the vehicle with the recording unit and navigation devices in the cab.

Individuals interested in taking on a route, or placing a stationary detector on their property, can contact the mammologists for more information, including how to sign up by emailing helpbats@dnr.IN.gov. See our priority areas for acoustic bat surveying map below. 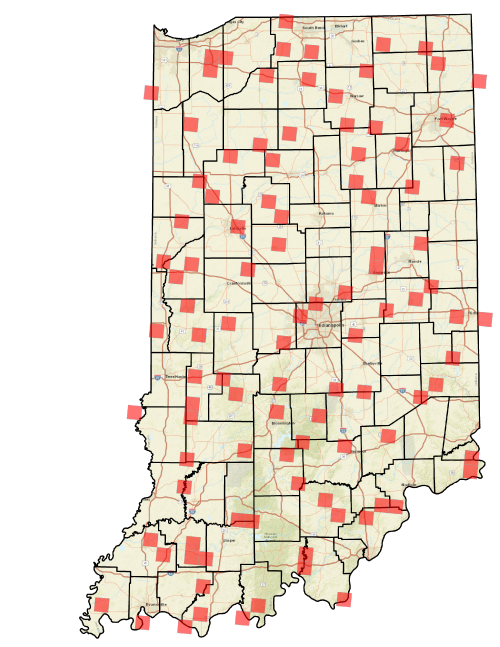 Mobile acoustic bat surveys were completed in 76 Indiana counties by wildlife biologists and citizen surveyors from 2011-19. These data helped verify the substantial impacts of white-nose syndrome on bat populations during the 2010s. In 2020, updated survey protocols were implemented as a result of a need to standardize bat surveys across North America. This survey protocol, provided by North American Bat Monitoring Program (NABat), examines smaller areas within counties using both mobile and stationary acoustic devices. The NABat program will help agencies collect consistent data that can be analyzed across the entire range of many North American bat species .