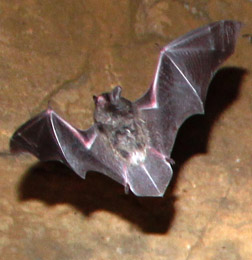 The Indiana bat (Myotis sodalis) is both a state and federally endangered species. The species was listed in the late 1960s due to human disturbance of caves that bats use for winter hibernating. Indiana bats are vulnerable to these disturbances as they hibernate in large colonies in very few caves. Bats are beneficial and important components of Indiana’s ecosystem, eating many night-flying insects, including crop pests. Despite the many benefits of bats, people should avoid contact with them and should not handle them. Bats are fragile and human contact can harm them. They also can carry rabies. Dogs and cats can encounter bats, especially those that are sick or injured, and should be vaccinated against rabies.

If you find a sick or dead bat, please report it.

The Indiana bat spends summer months living throughout the eastern United States. During winter, however, they cluster and hibernate in only a few caves. The largest Indiana bat hibernation sites are surveyed every other winter to minimize bat disturbance. Populations have increased since the mid-1980s. However, since first detecting white-nose syndrome in Indiana in 2010, the Indiana Bat population has declined by 27 percent.

The Indiana bat dwells in caves only during winter; however, there are few caves that provide the conditions necessary for hibernation. Stable, low temperatures are required to allow the bats to reduce their metabolic rate and conserve fat reserves. These bats hibernate in large, tight clusters which may contain thousands of individuals. 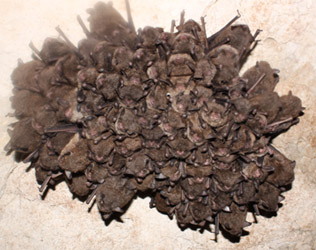 In spring, bats emerge from hibernation and migrate to summer homes. Because they separate into smaller social units, little is known about summer habitat requirements. Females form maternity colonies of up to 100 bats during the summer. But only a few of these colonies have been found. The colonies discovered were located behind the loose bark of trees, usually near tree-lined streams and rivers.

Indiana bats give birth to only one young in midsummer. These young bats are capable of flight in one month. The remainder of the summer and fall is then spent accumulating fat reserves for hibernation.

In the fall, bats congregate in caves and begin a swarming period. During this time, the bats fly in and out of their cave throughout the night. Mating occurs during swarming period, however; females store the sperm during hibernation and do not become pregnant until spring.

Indiana bats feed entirely on night-flying insects. Bats can eat up to 3,000 insects per feeding. They locate insects by emitting high-pitched sounds and waiting for an echo, which allows them to zoom in on a bug's location. The fat reserves accumulated by devouring insects during summer and fall allow the bat to sustain itself during hibernation.

Bats are in peril

White-nose syndrome is hurting the Indiana bat population and has now been found in 38 caves in Indiana. Although researchers are scrambling to find a solution for this disease, we are likely years from practical applications of such a solution in the wild. Now more than ever, conservation efforts that benefit bats are imperative.

The main factor for the spread of WNS and bat declines are human disturbance. Indiana bats hibernate in clusters that are very vulnerable to disturbance. People touring caves can disturb bats and cause them to awaken. When a bat is aroused, it uses energy at a higher rate, which decreases the energy supply available for the rest of the winter. Vandals have knocked down and killed large clusters of bats, and although illegal, some people shoot bats for entertainment. Because bats feed on insects, the increased use of pesticides has undoubtedly resulted in the poisoning of some of these animals. In the past, the clearing of forests has caused a decline in the summer habitat of the Indiana bat. Modern forestry practices have been developed and implemented to minimize this impact.

The conservation of this species in Indiana is the responsibility of the Division of Fish & Wildlife’s Wildlife Science Unit. The Indiana Nongame Wildlife Fund is the primary source for funding studies to monitor hibernating bats and further investigate the summer habitat requirements of this species. It includes both mobile surveys and stationary monitoring locations. You can help by donating online or on your Indiana tax form.

Because bats are misunderstood, perhaps the best conservation effort is to inform Hoosiers about these beneficial bug eaters. The nongame wildlife program has devoted much effort toward educating the public about bats and their benefits to man.