The green salamander has a flat head and body, the perfect body design for sneaking into tight cracks and crevices on cliffs. Even when they are not hiding, green salamanders can be hard to see; their bodies are patterned like lichen, which camouflages them on the rocky habitats where they roam. 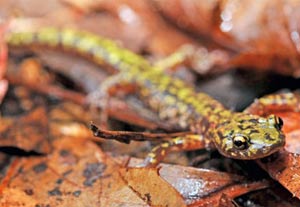 The green salamander (Aneides aeneus) can be identified by greenish markings found covering the top of the salamander’s head and body. These green markings are overlaid atop a dark background. The belly is gray in color and lacks the colorful markings found on the back. The square-tipped toes are also a distinguishing characteristic of this species. Adult green salamanders typically reach four to five inches in total body length.

The range of the green salamander extends from southwestern Pennsylvania along the Appalachian Mountains to northern Alabama and Mississippi. Disjunct populations occur in different areas adjacent to the continuous range. The Indiana populations of this species are disjunct and appear to be isolated from the main range. The green salamander is very rare in Indiana, known from select sites in just two counties. It is listed as an endangered species in the state.

HABITAT: Green salamanders reside in forested rock outcrops and cliff faces where they live within the crevices of rock structures. New research has shown that this species may also inhabit trees adjacent to rocky outcrops.

Beetles, spiders, mites, and ants may be eaten by green salamanders.

Mating typically takes place in May and June, but can occur later in the year. Females generally deposit around 15 to 20 eggs by attaching them to the inside wall of a moist rock crevice. Females usually stay with their eggs during the ten to eleven week incubation period.

Unlike many of the other terrestrial salamanders in Indiana, green salamanders spend very little time on the forest floor and are at home among the narrow cracks and crevices of their rocky habitat. These nocturnal salamanders are most active at night when they emerge to forage for food. Male green salamanders will forcefully defend their territories against other salamanders that might try to infringe upon their domain.

Investigations of rocky, cliff-like habitats near the Ohio River have revealed additional green salamander populations in recent years; however, the species distribution remains extremely limited in the state. Creating habitat-protection buffers along these and nearby cliff lines will help ensure the persistence of this rare and interesting species in Indiana.