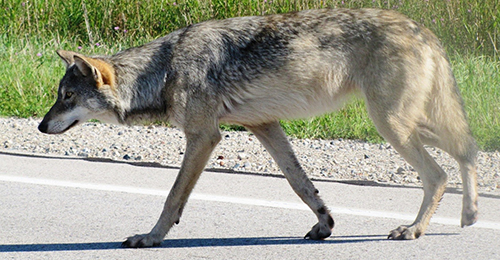 Although historic records are scarce, Indiana was once home to gray wolf (Canis lupus) populations. Early European settlers eliminated wolves from the state by 1908. In recent history, only one gray wolf has been confirmed in Indiana. The yearling male was found dead in east-central Indiana in 2003; it was later determined to have originated from a Wisconsin pack. Wolves can travel long distances in search of new territories, and it is possible for them to venture to Indiana. These animals are often young males that pass through quickly because they are unable to find a mate.

Gray wolves were designated as federally endangered in 1967 and listed under the Endangered Species Act in 1973. At the time of federal listing, Minnesota was the only state outside Alaska that held a population of gray wolves.

Midwestern gray wolves are smaller than western and Alaska gray wolves but are still more than twice the weight of an average coyote.

Wolves have blocky snouts and round ears that are small in proportion to their head, whereas coyotes have large, pointed ears. Coloration is a mix of grizzled gray, tan, brown, and black, with a cinnamon color on the back of the ears, which can be similar to a coyote. Wolves have robust legs and large feet, while a coyote’s legs are slim with small feet.

Wolf tracks are larger than coyote tracks, usually being 3.5 inches long, excluding the claw marks. For more information of comparing wolves and coyotes, the Wisconsin DNR provides a detailed page on canid identification. 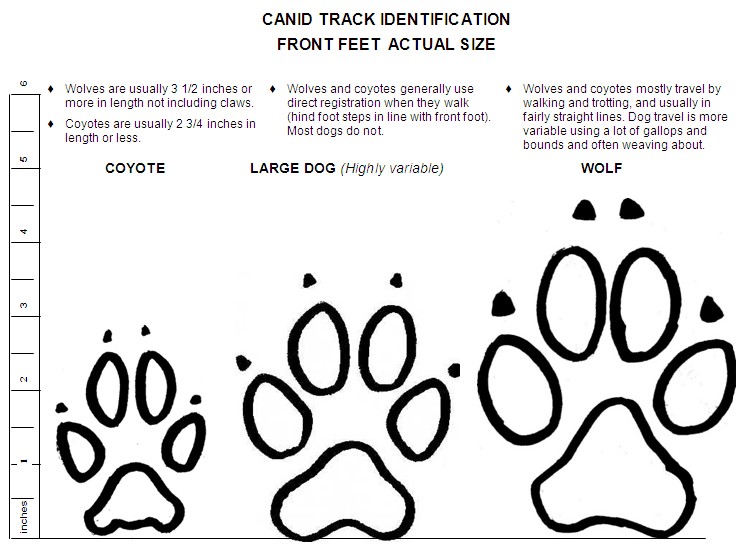 Wolves in Indiana are protected under federal law. State law allows a resident landowner or tenant to kill a wolf if it poses a threat to people or while it is causing damage to property owned or leased by the landowner or tenant. Any wolf killed must be immediately reported to federal and state wildlife officials.

How to report a wolf sighting in Indiana

Seeing a wolf in Indiana is extremely unlikely; domestic dogs or coyotes are often mistaken for wolves. Coyotes from a distance can look much larger than they are, which can lead to mistaken identity. There is currently no breeding population of wolves in Indiana, however, people may own domestic dog/wolf hybrids which can escape or run loose and easily be confused with a wild wolf.