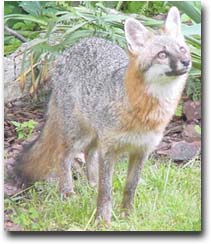 Gray fox research is underway to learn more about factors affecting populations in Indiana. Learn how you can help.

Gray foxes (Urocyon cinereoargenteus) are a unique canid (member of the dog family) because they are capable of climbing trees. Unlike dogs, coyotes and red foxes, their claws partially retract, allowing them to stay sharp enough to climb a tree. Because of this skill, many people used to think they were more closely related to cats, but they are a true fox and in the dog family just like red foxes and coyotes.

Gray foxes are native to Indiana, unlike the red fox which expanded its range into Indiana through introductions by early European settlers. As the land became cleared of timber, gray fox habitat was reduced. They prefer forests and brushy woodlands. The gray fox occurs in all Indiana counties where suitable habitat exists, but are more common in the forested south-central hills region.

Gray foxes mate in January, and three to five pups are born during March or April. The gray fox uses a ground den less frequently than red foxes, and may use a hollow tree or log, or a burrow hidden in rock outcroppings. Gray foxes stay mated for a least one season and may remain together for life. The male brings food to the female when she is nursing, and when the pups begin to eat solid food, he assists her in catching and bringing food to them. The family group breaks up in early fall when the young have learned to hunt.

Gray foxes are often elusive but can occasionally be seen venturing out from thick brushy areas into fields to looks for mice, voles, and plants that they prefer to eat in the evenings. They are most likely to be seen in southern Indiana counties like Perry, Crawford, and Harrison. Harrison-Crawford State Forest and Patoka Lake are public lands where you could have an opportunity to see a gray fox, especially if you are taking a night drive or camping. Gray foxes make a hoarse, gravelly bark that can be easily confused with that of a red fox; but are less talkative than their distant cousins and less likely to be heard.

Gray foxes are subject to canine diseases and parasite infections such as distemper, parvovirus, heartworm and in rare instances, rabies. Fortunately, rabies is seldom encountered among Indiana foxes. Internal parasites, such as tapeworms, roundworms and lungworms may lower their resistance to other diseases.

Gray foxes may be removed by a landowner or tenant without a permit if the animal is causing damage or posing a threat to humans. Landowners and tenants may designate someone to assist them if the designated person has a trapping or hunting license, does not receive any compensation, and is given written permission by the landowner or tenant. Individuals may also contact a Nuisance Wildlife Control Officer for help with wildlife causing damage.