Indiana was historically home to around 80 native freshwater mussel species. 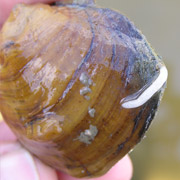 Mussels have a complex life cycle starting with fertilization. Fertilization occurs within the female where she stores eggs in special chambers in her gills. Males release sperm into open water, which females filter into their gills. Once fertilized, the eggs develop into microscopic larvae called glochidia.

Glochidia must attach to and be carried by a host fish (or amphibian for the Salamander Mussel) to complete the reproductive cycle. Different mussels have different host species and different methods for infecting a host fish. Some mussels simply release glochidia into the water (often packaged to look like a small worm or other food item called a conglutinate), while others have developed “lures” to attract in the host fish to infect their gills (see videos below). Once the glochidia are attached to the host fish, they will develop over the course of weeks and then drop off onto the bottom of the waterway. Hosts are rarely injured during this process.

Why Mussels are Important for Freshwater Ecosystems

History of Freshwater Mussels Use

From the late 1800s until the 1950s, freshwater mussel shells were valued for the American button industry. Shells were used to produce buttons, while soft tissues were sometimes fed to livestock.

The eventual use of plastics and metals led to the demise of the mussel shell button industry. Spent shells from button factories were sometimes used for walkways and resurfacing roads, ground into chicken grit, used for decorative purposes in flower beds and other lawn art, and used for linings of graves. 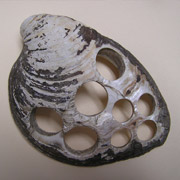 An old shell from a button factory with buttons punched out.

By the 1950s freshwater mussels became important for the cultured pearl industry in Japan and in later years other countries. Freshwater mussel shell material is sectioned and then ground into small beads that are then surgically implanted into pearl oysters, serving as the nucleus for a cultured pearl.

Freshwater mussels have also been harvested solely to find freshwater pearls. The mother-of-pearl interior of shells has also been used for pearl inlays on gun and knife handles and for jewelry.

Freshwater mussel harvest was legal in Indiana until 1991, when it was suspended to help protect dwindling populations. It is still illegal to take or possess a live mussel or dead shell material from Indiana waters. (312 IAC 9-9-3 Mussels)

Nearly half of Indiana’s native freshwater mussel species are either already gone (extirpated) from the state or are listed as endangered or species of special concern. Alterations to waterways, (channelization, dredging, dam construction), changes in hydrology, exotic species introductions, and pollution are major threats to these animals. 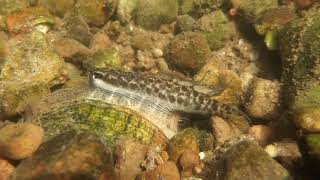 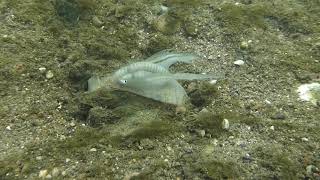