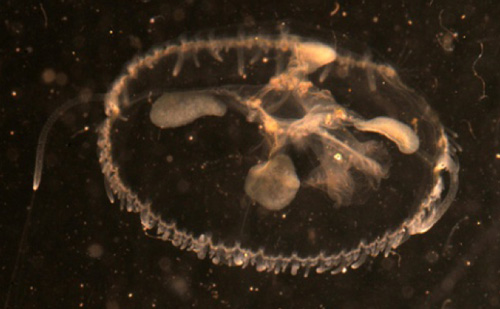 Are there jellyfish in Indiana?

Freshwater jellyfish have been observed statewide in a variety of aquatic habitats. They can occur in virtually any type of waterbody if conditions allow, including lakes, ponds, quarries, reservoirs, and even sluggish streams and rivers. Only one species of freshwater jellyfish (Craspedacusta sowerbyi) occurs in North America, but this species is found virtually worldwide. They have a clear or translucent white bell-shaped body about the size of a dime or nickel. Unlike some marine jellyfish, the freshwater jellyfish does not pose a hazard to swimmers. They are typically found in late summer during August and September. Their appearance is sporadic and unpredictable. Individuals become apparent as they rise to the water surface in afternoon to early evening, especially on clear and warm days in calm water.

Will they sting me? 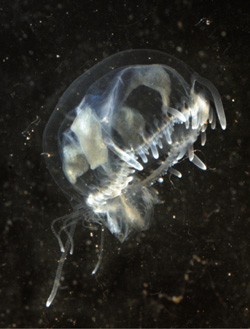 No. Although they do have stinging cells that they use to catch their prey (zooplankton), there have been no reported cases of freshwater jellyfish stinging humans. These jellyfish are very small and you do not need to worry about swimming in a body of water with them.