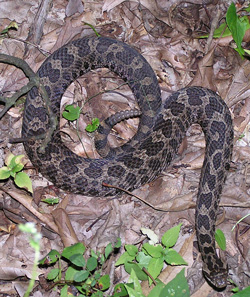 Cryptic patterns and coloration serve to break up the shape of the eastern massasauga rattlesnake to better disguise it in vegetation, rocks, leaves, and shadows. The eastern massasauga can remain undetected with the help of its pattern, even at close range. The heat sensitive pits between the eyes and the nostrils are unique to pit vipers.

DESCRIPTION: The eastern massasauga (Sistrurus catenatus) is a small to medium sized rattlesnake, with adults typically reaching lengths of approximately 18 to 30 inches. The general appearance of the eastern massasauga can vary, with some individuals having brown blotches on a gray background and others being almost completely black in color. The presence of a rattle on the end of the tail distinguishes it from all other snakes in its Indiana range (although juvenile specimens may have a very small, undeveloped rattle which may be difficult to see).

STATUS: The contiguous range of the eastern massasauga reaches from eastern Missouri, north to Wisconsin and eastward to southern Ontario and western Pennsylvania. Isolated populations occur in central Missouri and western New York. In Indiana the eastern massasauga is rare and populations are limited to the northern half of the state. It is listed as an endangered species in Indiana, and is Federally threatened.

HABITAT: Eastern massasaugas tend to inhabit wetland areas but may also use drier habitats. They have been found to occur in marshy grasslands, lake edges, fens, dry prairie and woodland, and forested swampland.

REPRODUCTION: Mating may occur in both spring and fall, with the young being born in late summer. Clutches range in size from 2 to 20. Newborn young are approximately 7- to 10-inches in length.

LIFESPAN: The longest-lived individual is reported to have reached 20 years in age.

BEHAVIOR: The season of activity for the eastern massasauga in Indiana is relatively long. Individuals have been reported as early as April and as late as November. Hibernation may be spent in rock crevices, crayfish burrows, or old stumps. During the spring and fall these snakes spend time basking and foraging for food. Hot summer temperatures may cause them to develop nocturnal habits. The disposition of individuals can vary, but eastern massasaugas are generally thought to be relatively docile and sluggish animals unless provoked. Nevertheless, caution should be taken when encountering a massasauga as their venom can be lethal to humans.

PREDATORS: Natural predators of the eastern massasauga that have been reported include bullfrogs, racers, loggerhead shrikes, weasels, coyotes, and other mammalian predators.

MANAGEMENT: Current legal protection forbids the collection and killing of this species in Indiana, but habitat conservation will likely play an even more important role in the management of this species