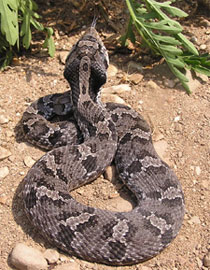 The Eastern hog-nosed snake is a stout, medium-sized snake (22-32 inches) with a uniquely upturned nose. It is highly variable in color and may be yellow, orange, light brown or black. These snakes may have a pattern of dark quadrangular blotches on their backs, or be uniform in color. The tail often forms a tight curl.

Eastern hog-nosed snakes prefer dry, open habitats such as fields and forest edges. They can often be found in sandy areas where they use their snouts to make burrows in the loose soil. 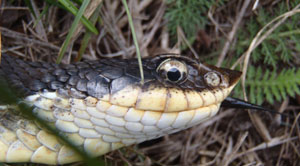 Eastern hog-nosed snakes are toad-hunting specialists. They will also eat frogs and salamanders.

Eastern hog-nosed snakes are known for their theatrical defensive behavior. Alarmed snakes inflate the body with air, flatten the head and neck like a cobra, and expel the air in a long hiss. They will also open the mouth wide and strike at potential predators. If the predator is still undeterred, they will dramatically feign death. The snake will writhe, regurgitate food, and roll onto its back with mouth wide open and tongue hanging out. If righted, the snake will roll over onto its back again.

The Eastern hog-nosed snake may be referred to as spreading viper, spread-head, blowing viper, and puff adder due to their defensive displays. Their specialized snout makes them highly adapted for burrowing and a wide gape and enlarged teeth at the rear of the mouth help keep hold of toads while feeding. 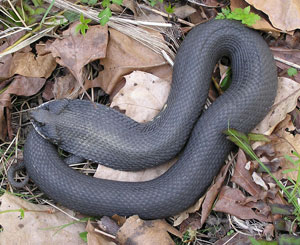