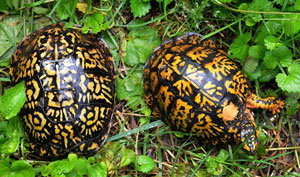 Eastern box turtles have been documented to exceed 60 years of age. Very old specimens may reach ages of more than 100.

The Eastern box turtle’s range covers much of the eastern and central United States. Box turtles are found throughout Indiana, but are more common in the state’s southern half. Populations are declining throughout their range. Habitat loss, road mortality and collection by humans are some of the leading factors in box turtle declines. Box turtles are protected in Indiana and may not be collected from the wild. Forests are the preferred habitat of the Eastern box turtle, although they may be found in grasslands and wetlands.

The Eastern box turtle is terrestrial, spending most its life on land. Box turtles are most active in morning and evening. However, they also may be observed during cooler temperatures after a rain. During hot and dry weather, turtles will occasionally seek out shallow water. When threatened or startled, box turtles withdraw their head, limbs and tail into their shell and “box up,” pulling the bottom of their shell up against the top. Colder temperatures in October and November cause box turtles to seek shelter in shallow burrows, where they will spend the coming months in winter dormancy. Spring emergence typically occurs during March and April.

In Indiana, mating has been observed in late April and May, but may take place throughout the summer and into the fall. Female turtles normally deposit one to seven eggs in an excavated nest before covering them with dirt. The eggs hatch three to four months later. Hatchlings usually measure about 1 inch long.

Unlike other animal species, visual cues are critical for finding mates. A male must see and recognize a potential mate before approaching her. Therefore, high adult population density is critical for reproduction. Female box turtles may retain viable sperm for years, but the proportion of infertile eggs increases as access to male turtles declines. Even if a female does lay eggs, the eggs and hatchlings rarely survive. Box turtles do not reach sexual maturity until they are 8 to 10 years old. 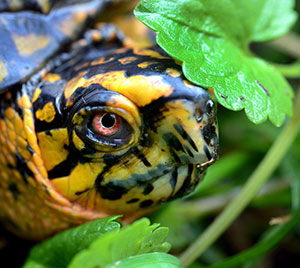 Recent initiatives have led to the protection of the Eastern box turtle in Indiana. Since 2004, the collection of Eastern box turtles from the wild is prohibited. A permit is required to care for captive specimens in the state. Conservation initiatives and habitat preservation will help protect this turtle from further declines.

Nationwide research reveals that Eastern box turtle populations are in trouble. Indiana and other states are taking measures to protect box turtles before they become threatened or endangered. Although Indiana does have a few healthy populations, they are scattered. New developments, environmental changes, chemical pollution, captive breeding and possession all negatively impact the long-term survival of box turtles in Indiana.

Other reasons why box turtles are regulated:

Displaced box turtles, either escaped or released, have a hard time surviving. Those that survive pose a threat to wild populations. Diseases occurring in captivity can spread rapidly in wild populations. When foreign turtles interbreed with wild turtles, genes are introduced that are less suitable for local conditions and weaken the box turtle population.

The long life expectancy of turtles makes having one as a pet a long-term responsibility. The keeper must care for it long after interest wanes. Unfortunately, most individuals do not consider the long-term care required for owning a turtle and turn them loose when they are no longer wanted.

Collection as a Pet or for Profit