The Eastern cottontail rabbit (Sylvilagus floridanus) is common throughout Indiana. It is one of the most 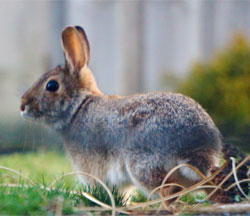 important game species in the United States and is perhaps the most popular small game species in Indiana. However, rabbit hunting has declined steadily since the 1940s.

Typically, cottontail populations cycle between highs and lows. The population tends to increase until a limiting factor such as poor reproduction, food scarcity, predation, disease, and/or weather conditions reduce populations. These reduced population numbers may continue for several years before gradually increasing to another high. Peak population numbers usually occur at intervals of about 10 years.

The Eastern cottontail rabbit (Sylvilagus floridanus) is found throughout the eastern two-thirds of the United States and south through Mexico. In this range, there are 12 subspecies with only one native to Indiana, Sylvilagus floridanus mearnsii (pronounced murn-see-eye). The eastern cottontail is found throughout Indiana, including suburban and urban areas. Populations are highest where food and cover are best. Dry upland areas often support above-average rabbit densities. Rabbits seek habitat on edges of open spaces such as fields but are adaptable to other habitats.

Breeding activity may begin in January and continues through September. But, over 90% of rabbit births occur between March and August.

Most courting activity is done during the early evening and dawn. About 28 days after mating, the young are born, and cleaned by the female. Females, called ‘does,’ make a nest that usually is a slight depression in the ground dug with the doe's forefeet. It is constructed of grass and leaves and lined with fur pulled from the female's chest and abdomen. If a nest is found, do not disturb it. The female only returns to the nest a few times a day to the nest to deter predators. Placing a small stick over the nest will allow you to determine if the female has returned. If the stick has been moved it is likely the female has returned and the nest is not abandoned. If you still have concerns about an orphaned/injured animal you can contact a licensed wildlife rehabilitator for help. 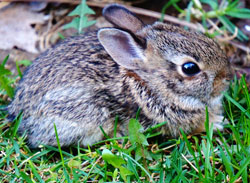 At birth, young are furless, blind, and weigh less than 1 ounce. Young rabbits grow fast, and by the end of the first week, their eyes open. By 14 days of age, they begin leaving the nest to feed on leafy greens. Over the next few days, they may return to the nest to nurse at night, spending the day feeding nearby. Young are completely weaned between 4 and 5 weeks of age. At this time, they are well developed and able to survive on their own and usually disperse from the nest area by 7 weeks of age. Females are capable of reproducing at 3 months of age and may reproduce their first year.

The doe is able to mate again the same day the young are born and can start having a second litter. Litter-size may range from 1-9 young, averaging 4-5 per litter. Although capable of having six litters each year, the average is 3-4. By 6 months, the young adult sized and difficult to distinguish from adults. Rabbits invest a lot of energy in reproduction and little in adult survival. The average life expectancy from birth is only about 4 months.

Rabbits are opportunistic feeders that eat vegetation almost exclusively. Some studies have shown up to 145 plant species in rabbit diets. They prefer small plant material and food types vary by season and availability.

A rabbit’s diet can also become a nuisance to landowners. Almost anyone who has found a newly planted seedling cut off or tree barked may consider the cottontail a pest; however, the rabbit gets blamed for some damage caused by mice, squirrels and other rodents. Several types of repellents have been used with mixed success. About the only sure method of preventing damage is by using 1/2-inch mesh hardware cloth or 1-inch mesh chicken netting cut 12 to 18 inches long. This is formed into a cylinder, placed around the seedling and forced into the ground to hold it upright. This will protect the seedling for several years from mice as well as rabbits.

Rabbits have been known to eat plantings in gardens or flowerbeds. To protect your garden or berry patch, place a fence at least 2 feet high of chicken wire or strong hardware cloth with the bottom tight to the ground and buried a few inches. Be sure the mesh is 1 inch or smaller. Remove brush piles and other cover near the garden to make fewer areas for rabbits to hide.

Place a dome or cage of chicken wire over a small flower bed to allow vulnerable plants such as tulips to start growing before leaving them unprotected.

If you want to trap or shoot the rabbits, you will need a permit from the DNR, or you will need to use those methods legal only during the open hunting season (firearms can only be used where legal). Live cage-traps (wire or wood) that are baited with dried apples or dry ear corn can be effective in capturing cottontail rabbits.

Encouraging the rabbit’s natural enemies such as hawks, owls, and foxes can also help control the rabbits.

It is illegal to possess wildlife, including cottontail rabbits, without special permits.

For rules and regulations, check out the Hunting and Trapping Guide.