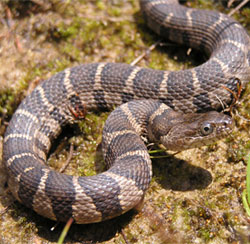 Stout, dark-colored, dark crossbands on the back, cream-to-reddish belly with dark semicircles, round pupils

Common watersnakes have medium to heavy builds and may be 25 to 40 inches long. Head is distinct from neck. Pattern in juveniles can be very different from adults. Juveniles have dark crossbands on either light-brown, tan, or gray background that is very distinct, some may be red or orange-brown in color. Pattern turns to blotches toward the tail. Adult patterns get darker as they age and may appear solid brown or black in old individuals. Belly color may be cream to reddish in color, growing darker toward the tail with dark semicircles. 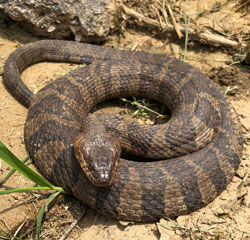 The Common watersnake is the most common aquatic snake in Indiana and may be found in nearly any aquatic habitat including around ponds, lakes, swamps, streams and backyard fish ponds. They prefer warm, permanent, shallow water with access to basking locations such as rocky ledges, logs and bridge piers. They can be found in both urban and rural settings. In the fall they may be found away from water as they travel to hibernation spots.

When approached while basking, Common watersnakes will quickly plunge into the water. If cornered or restrained, this species will act aggressively. Most will flatten the head, an act that often gets them confused for a venomous snake, and strike. They may also emit a foul-smelling secretion from the cloaca. 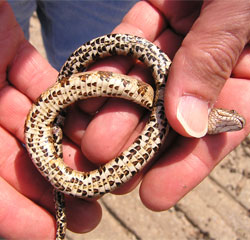 This species is often called “water moccasin” in Indiana, possibly contributing to its confusion with the cottonmouth, which is also called water moccasin. These snakes darken with age, with older individuals sometimes appearing entirely black or brown, which lends to their being confused with the cottonmouth. Common watersnakes are often senselessly killed by people who mistake them for copperheads or cottonmouths.