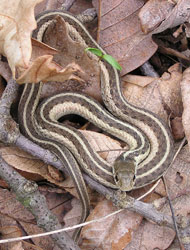 The common gartersnake is a medium sized snake (18-26 inches) that is quite variable in color. The typical pattern is three light stripes running longitudinally down the body on a brown, tan or olive background. Red or orange pigment may show through on the sides. Some common gartersnakes have a checkered pattern. The belly often has two rows of dark spots.

Common gartersnakes are found in a wide variety of habitats, but are most often found in wet, open, grassy places. They can often be found in old fields, borders of streams or ponds, edges of woodlands, and wetland margins.

Common gartersnakes are more cold tolerant than other snake species. They hibernate communally in a variety of sites and may be seen basking on warm days during the winter. 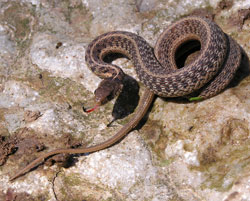 Common gartersnakes are primarily active during the day, but are frequently nocturnal during hot weather.  When cornered, they will sometimes flatten their head and body, coil, and strike. They have a red tongue with a black tip. If they are grabbed they will excrete a foul musk on the person or animal bothering them.