Named for the red hat and robes of a church prince, the cardinal was chosen as the official state bird in 1933. Commonly seen by Indiana residents along hedgerows, wood margins and roadsides, the cardinal is the only red bird with a crest in the United States. 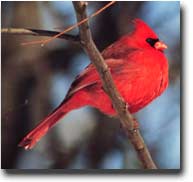 Smaller than a robin, the cardinal (cardinalis cardinalis) is 8 to 9 inches long from the tip of its bill to the tip of its tail. The adult male is all red except for the black mask at the base of the bill. The markings of the female are much more subdued. She has an olive-gray back, dull red-dish wings and crest, and soft pink-brown underparts. A stout, coral-red bill and dark red feet are also common markings of both the female and male. Immature cardinals wear a plumage even browner and duller than an adult female. Unlike the adult bills, immature bills are blackish. Young cardinals will molt by the fall and will gain their adult plumage by winter. Both males and females are talented singers, and their most common song is a loud, whistled cheer, cheer, cheer, cheer.

A common sight in both rural and urban settings, cardinals are found in backyards as well as woodland borders. Cardinals will often seek refuge in shrubs, thickets and tall weeds during the cold winter months. For nesting, the cardinal prefers dense thickets, shrubs or saplings no more than 10 feet high in an open woodland area. Cardinal will frequently line their nests with strips of wild grapevine bark. They often roost in dense shrubs and red ceder trees, and will forage along roadsides.

Cardinals are located across the entire Hoosier state with the largest population found throughout central Indiana, although winter counts reveal a low population of cardinals in northwestern Indiana. The cardinal is non-migratory; however, the bird will often wander widely during the winter. In areas where there is an abundance of food, it is not unusual to see 30 to more in a flock.

Cardinals have been present in Indiana for a long time. In the 1800s, the cardinal was sought after as a prized cage bird. Hardy beautiful and a good singer, the bird lived well in captivity when cared for properly.
Today, the cardinal is protected throughout the United States, and its brilliant color and vibrant song brightens many drab winter days.

A cardinal is rarely seen without its mate. They remain together throughout the year, but during the winter months, the bond may be relaxed. With the arrival of spring, the pairs begin singing and feeding together.

Nest building begins in late March or early April. as the female weaves the nest with bark strips, rootlets and grass, the male follows her around singing his most vibrant tune. Part of the courtship behavior is the feeding of the female by the male during the two weeks she is incubating the eggs.

The cardinal's breeding season is quite long, and eggs have been found in nest from April to September.

While the female prepares for a second brood, the male will care for the fledglings, feeding them a variety of insects. The male's instinct to feed young birds is so strong that he has been seen stuffing food down the throats of fledglings of other species.