Bobcats, the only resident native wild cat in Indiana, are common in southern and parts of central Indiana, and increasing in northern Indiana. They are rarely seen because of their ability to blend into their surroundings and move silently.

Bobcats have been reported from almost every Indiana county but are most common in southern and west-central Indiana. A study conducted by the DNR in south-central Indiana revealed that bobcats are capable of dispersing up to 100 miles from where they were born. 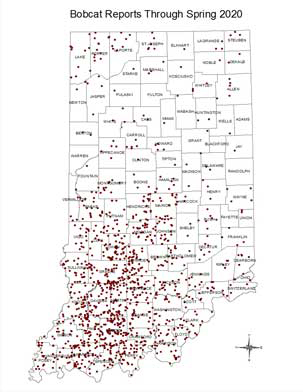 The DNR collects reports of bobcat sightings, trail-camera photos, and mortalities. Bobcat reports are also collected through the annual Archer’s Index, in which volunteer deer bow hunters report the number of hours they hunted and the species they saw while hunting. Snapshot Indiana, a citizen-science trail-camera survey, also helps document bobcat presence in some areas.

Indiana research has documented bobcat diets to include:

Indiana research did not document wild turkey consumption by bobcats, though bobcats would eat a wild turkey if they manage to catch one. Wild turkey does not seem to be a common prey item for Indiana bobcats.

Bobcats are territorial and generally solitary animals. While bobcats can breed year-round, the vast majority of mating generally occurs in early spring during February and March with the young being born after a 62-day gestation period. An average litter of 1–3 kittens is born in April or May. The female may move the kittens to several different dens during the growth period. Males do not assist in raising the young. The young generally remain with the female until they reach 1 year of age then disperse. Kitten survival is associated with prey abundance, with more young surviving during the years of higher rabbit and other small-mammal populations.

As with all wildlife, bobcats should be respected if encountered. The natural response of a bobcat is to move away from humans. Bobcats, like all wildlife, should never be fed or approached because doing so can reduce their natural response to avoid people and lead to negative interactions. Removing potential attractants that attract rodents, like pet food or bird feeders, can help encourage a bobcat that is hanging around a yard to move on.

Pets should always be leashed when outdoors or kept in a kennel with a secure top to prevent negative interactions with all wildlife, including bobcats. Conflicts between bobcats and livestock are uncommon but may occur. Most reports are of bobcat predation on chickens. Landowners or lessees may request a nuisance wild animal control permit from the DNR for bobcats if damage is occurring. Landowners or lessees may also hire a nuisance wildlife control operator to assist them if they are not comfortable removing the bobcat themselves. Bobcats may not be removed without a permit.

Indiana residents having conflicts with bobcats can help Indiana DNR collect information by using the wildlife complaint form. This form allows DNR to track reports of conflicts for key species of interest. The form does not submit a permit application on your behalf to remove an animal, and it should not be used to submit sightings of bobcats. A nuisance wild animal control permit is needed to remove a bobcat. Bobcat sightings can be reported on the report a mammal page. DNR appreciates the support of Indiana residents in helping us collect better information about wildlife conflicts.