The bald eagle flies with its wings stretched out flat.

The turkey vulture flies with its wings arched in a V-shape.

To better catch fish, the osprey flies horizontally with its wings bent at the wrist. 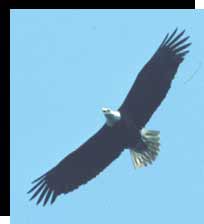 Active flight is with slow, powerful wingbeats. They soar and glide usually on flat wings. Bald eagles have a noticeable, unusual flight behavior of banking and flapping their wings vigorously while vertical.

The bald eagle received its name from the distinctive pure white head, neck, and tail. Adults have a brown-black body and a large yellow bill. Adult males and females look the same, however the female is larger. 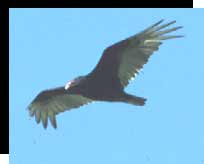 The large turkey vulture can be easily confused with the bald eagle. Adults are 24 to 28 inches tall with a wingspan between 63 and 71 inches.

Turkey vultures are extremely common but can be distinguished easily from other raptors with its distinct flying behavior. In flight, it has long wings and glides with its wings held in a shallow V-shape.

Adult turkey vultures have a featherless red head with small white warts in front of and below the eyes. Their -red neck is wrinkled and the beak is whitish in color. The entire body is brownish or gray-black and the underwing is two-toned silver and black. 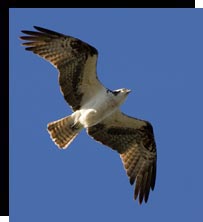 Osprey are anatomically different from other raptors primarily in their superb fish-catching features. Adults are between 21 and 26 inches tall and have a wingspan of 59 to 67 inches.

With bright yellow eyes and gray, black and white under-feathers, the osprey can be differentiated from the bald eagle. Young are downy white and leave the nest around two months after hatching. The juvenile has similar coloring to the adult but has white scaling on its back.

The adult bird has long narrow wings, held above horizontal and slightly arched in flight with a distinct bend at the wrist. In flight, their gull-like crooked wings and white head with wide black eye-stripe are distinctive. Active flight is with slow, steady, shallow wingbeats. Ospreys will sometimes soar on flat wings and hover frequently while hunting over water.