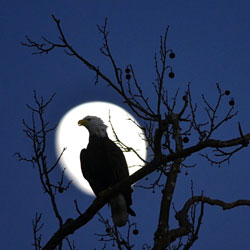 The bald eagle (Haliaeetus leucocephalus ) has been the national bird of the United States since 1782. Once a federal- and state-endangered species, due to hunting and use of pesticides, the bald eagle has recovered under protection.

Bald eagles are larger than most raptors. In flight, the bald eagle holds its large broad wings flat. Species that look similar include the turkey vulture and osprey, but distinct differences are present. 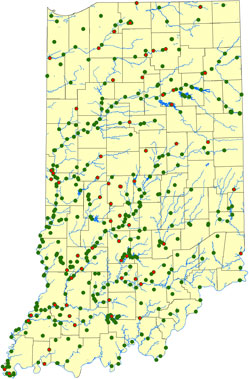 Known bald eagles nests
(green) and most recent nests
discovered (red) in Indiana. Bald eagles nested in Indiana until the 1890s, and small numbers wintered in the state from November through March. Bald eagles are found mostly along major rivers and other large bodies of water. Mid-winter bald eagle surveys conducted from 1979-2020 showed a dramatic increase in wintering eagles in the state.

In 1985, the Indiana Nongame & Endangered Wildlife Program began the Bald Eagle Reintroduction Program. Seventy-three eaglets (seven to eight weeks old) were obtained from Wisconsin and Alaska from 1985 through 1989 and brought to Indiana. They were placed in a 25-foot nest tower in a secluded bay on Lake Monroe. The birds were monitored and fed daily until they were old enough to fly at 11 to 12 weeks of age. Since then, the eagle population has continued to expand. In 2020, there were over 350 nesting territories in Indiana.

Bald Eagles typically nest in forested areas near water, avoiding heavily developed areas when possible. For perching, they prefer tall, mature trees that give a wide view of the surrounding area. In winter, they may be found in dry, open uplands if open water is near for fishing.

Their huge nests—the largest nests of any North American bird—are typically 5-6 feet wide and 2 feet deep. Wintering eagles prefer mature trees along large, open bodies of water for daytime perches. At night, large trees in sheltered valleys and ravines are preferred for roosting, and it is common for eagles to roost in small groups during winter. 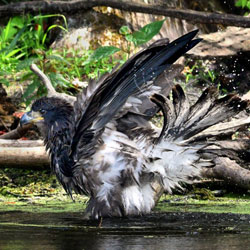 Young eagles leave the nest or “fledge” at 11 to 12 weeks old. Adult eagles do not begin to nest until they are 4 or 5 years old. Eagles mate for life and return each year to the same location to nest and breed, selecting nest sites close to where they were raised as young.

Bald eagles have a 35-day incubation period and will leave the nest at about 10 weeks old.

The primary diet for bald eagles is fish, which are taken near the water’s surface. Fish are usually carried to a tree or perch and consumed. Eagles also take waterfowl, rabbits, squirrels and other small mammals. Most eagles consume animals weighing up to one pound. Eagles have excellent eyesight and can locate prey up to 2 miles away. 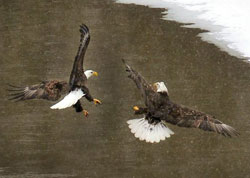 Between 1985 and 1989, 73 bald eagle chicks were released at Monroe Lake in Monroe County.

Upon reaching adulthood at 4-5 years old, bald eagles return to within 50-100 miles of where they fledged. The purpose of returning is to nest.

Indiana's first successful bald eagle nests in this century occurred in 1991 at Monroe Lake and Cagles Mill Lake. The state's last successful nest before then was in 1897. Loss of habitat and decreased reproduction due to pesticides, such as DDT, contributed to the bald eagle's disappearance from Indiana.

Bald eagle nesting was monitored and the young eagles were banded with leg identification tags to help track their movements. The number of nesting territories continued to increase.

By 1998, there were nests on rivers and lakes from Tippecanoe County south to Posey County and east to Brown County. Bald eagles continued to do so well their conservation status was changed from state-endangered to a species of special concern in 2008, and comprehensive surveys were discontinued after 2010. In 2020, there were over 350 eagle nesting territories in Indiana and bald eagles were removed from the list of species of special concern.

Although bald eagles are no longer listed, they are protected by other state and federal laws, including the Bald and Golden Eagle Protection Act. If you see bald eagles in Indiana, observe the birds, their nests, and roosts from a distance of 330 feet, which is roughly the length of a football field. Photography enthusiasts should take photos of eagles with a telephoto lens. Foster a climate of respect for wildlife by sharing these guidelines with your friends.

The bald eagle project and ongoing research would not be possible without donations to the Indiana Nongame Wildlife Fund, the main funding source of all nongame and endangered species research and management. Donate online at on.IN.gov/nongamewildlifefund. 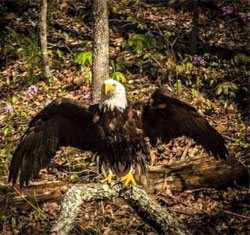 A remarkable story comes from one of the 73 eaglets first brought to Indiana. Bald eagle #C43 was spotted around Monroe Lake in late May 2015. She has been seen intermittently by outdoor recreationalists since then.

Records state that C43 was removed from a nest in Whitestone Harbor, Alaska, on July 22, 1988, making her 30 years old at the time of her last sighting in 2018, arguably one of the oldest bald eagles in Indiana. C43 is a powerful reminder of the tireless and determined effort to recover this species, and a symbol of hope for our state’s endangered species.

Chronology of eagle nesting in Indiana

Have you seen an eagle nest?

Report your sightings to dfw@dnr.IN.gov.

New eagle nest locations and status updates to known nests are currently collected with the help of citizen scientists, who report nests to DNR biologists. As a reminder, observe nests from a distance of 330 feet, which is roughly the length of a football field.