Although classified as a "rat", the Allegheny woodrat possesses none of the undesirable characteristics of its other rat cousins. The woodrat is docile and meticulously clean, thereby posing no threat to human health or safety. It occupies habitats rarely used by humans thus decreasing the chance of human/woodrat interactions. 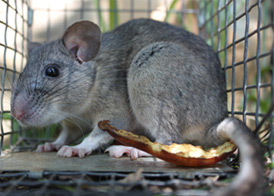 The Allegheny woodrat is a medium-sized nocturnal rodent similar in appearance to a white-footed mouse. An adult woodrat is 15-18 inches in length which includes the seven-inch long tail. Unlike other rats, the woodrat’s tail is densely haired and is distinctly bicolored: brownish black on top and white below. The fur is long, soft and brownish-gray or cinnamon in color with a white belly and feet. An adult woodrat weighs approximately nine ounces. Immature woodrats are more gray in color, particularly on the belly.

The Allegheny woodrat is extinct or declining over approximately 35 percent of its original range. Fossil remains indicate that woodrats in Indiana once ranged as far north as Owen County. Their modern range, however, is mostly limited to limestone and sandstone bluffs bordering the Ohio River in Harrison and Crawford counties.

The preferred habitat for the Allegheny woodrat is rocky areas in deciduous forests. In Indiana, they can be found in small caves or rock crevices and fissures in the steep cliff faces adjacent to the Ohio River. Their home range is approximately 100 yards in diameter.

Plant materials are the primary component of the woodrat's diet. This includes buds, leaves, stems, fruits, seeds, acorns and other nuts. Food is stored or "cached" in large piles called middens. Woodrats eat about five percent of their weight in dry matter daily.

Breeding season in Indiana peaks during April and May. After a gestation period of 30-37 days, a litter of two to three young is born. Young woodrats are weaned within a month. Sexual maturity is reached in less than a year. Some females will produce a second litter in late summer. A few early-born females may breed in the same year as their birth. Indiana woodrat nests are globular shaped and well-formed. They are 15 -18" in diameter with a five inch diameter "cup" in the center of the nest. The nest is lined with finely shredded red cedar bark. Nests are used for year-round shelter as well as for rearing young.

Woodrats generally live up to three years in the wild and can live longer. 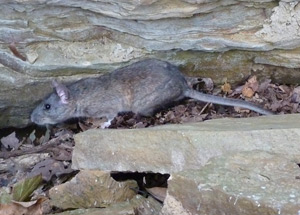 The woodrat is primarily nocturnal and rarely travels more than 150 feet from the center of its home range. Woodrats collect and cache nonfood items such as bottle caps, snail shells, coins, gun cartridges, feathers and bones. This trait is responsible for the woodrat's nickname of "trade" or "pack" rat. Nonfood items are often found with plant material in middens near the nest. At this time, scientists do not know what purpose is served by this collecting.

Major predators of the woodrat are owls, weasels, foxes, raccoons and snakes.

Several factors may be contributing to the population decline of the woodrat. These factors are:

Declining numbers tend to be more concentrated in the northern region of the woodrat's range. Management programs will be of little use until the causes of decline are determined.

The staff in the Office of Science and Research currently monitors the status, distribution and relative abundance of woodrat populations through periodic surveys. Other major activities include field searches for new localities and research to identify the factors responsible for decline. These surveys are funded by donations to the Indiana Nongame Wildlife Fund.