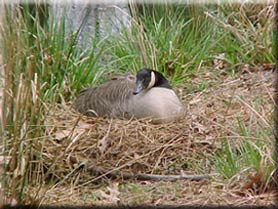 The Canada goose is one of the largest members of the waterfowl family. The subspecies that breeds in Indiana is the giant Canada goose (Branta canadensis maxima). These geese were common birds throughout the Midwest before European settlement. Unregulated hunting and wetland drainage reduced the number of giant Canadas to the point where they were thought to be extinct. In 1962, Dr. Harold Hanson of the Illinois Natural History Survey concluded that the geese that wintered at Rochester, Minnesota, were giant Canada geese. Several other small remnant flocks were identified following the discovery in Minnesota. Many conservation agencies worked to re-establish giant Canadas throughout their original breeding range. Flocks are now well-established throughout the Midwest. Canada geese thrive throughout Indiana, nesting in every county of the state. Major populations occur in the Indianapolis metropolitan area, across the northern third of the state, on coal company lands in southwestern Indiana, and on many state Fish and Wildlife Areas.

All Canada geese are similar in appearance, despite size variation. Adult Canada geese have grayish brown wings, backs, sides, and breasts; black tails, feet, legs, bills, and heads; and long black necks with distinctive white cheek patches. Males tend to be larger than females, though their coloration is identical. Goslings are light yellow with greenish-gray heads when they hatch. As they mature, they become darker until they resemble the adults about the time they can fly, about 70 days after hatch. 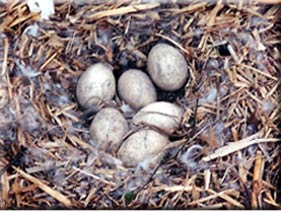 Most Canada geese pair with a mate at age three, though some begin this process at two years. Pairs usually stay together for life. If one member of a pair dies, the other goose usually finds another mate within the same breeding season. In Indiana, flocks break up into pairs for nesting in mid- to late February. Nesting activities begin from mid-March through late April.

Canada goose nest site selection can be variable, though the nest is nearly always within 150’ of water. Ideal nesting sites for Canada geese are any place that provides concealment near water, including: islands; muskrat houses; artificial nesting structures; vegetation along shorelines; at the base of mature trees; under shrubs; in thick aquatic vegetation such as cattails; in flower boxes and landscaping in urban and suburban areas; and in doorways or on structures, especially rooftops, in urban areas.

Once nesting has begun, the male and female will both defend the nest. The female lays eggs about every 1.5 days. Once all the eggs are laid, incubation begins. The eggs are incubated for 28 days. The average clutch size is 5 eggs, though 2-12 eggs is possible. The nest size can range from 12-40 inches in diameter, constructed in a bowl shape of plant material and feathers from the female’s breast. All eggs in the nest hatch at the same time. The adults then lead the goslings away from the nest, within 24 hours of hatch. If the nest is destroyed before the eggs hatch, the pair will generally begin re-nesting at or very near the original nesting site. Canada geese have a greater tendency to re-nest if the original nest is destroyed earlier in the nesting season.

Both adults, especially the male, vigorously defend their broods for approximately 10-12 weeks after hatch. This defense diminishes as the goslings grow older and begin to be able to fly. It is common to see several broods of goslings together, termed gang broods, during this time. Gang broods may range from 20 to 100 goslings following just a few adults. Gang broods are more common in areas of high nest density. Family groups of parents, that year’s offspring, and sometimes 1 or 2 of the previous year’s goslings stay together well into the winter. 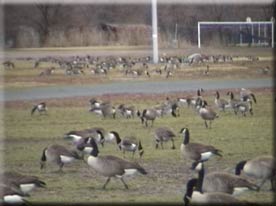 Canada geese are grazers and chiefly vegetarian, though fish or invertebrates have been reported in their diets in small amounts. In fall and winter, Canada geese can often be seen in waste grain areas (harvested corn, wheat, soybean fields) feeding in mornings and late afternoons. These foods are high in calories and provide the energy the birds need during colder periods. They may graze wheat fields in winter, but grazing at this time does not cause yield loss. In the summer months, Canada geese feed on aquatic vegetation, succulents, forbs, and grasses. Often lawn grass is preferred by Canada geese in urban environments, particularly fertilized bluegrass. Canada geese choose to feed in areas that are relatively open (without tall vegetation) so that they can see potential predators and other dangers.

All birds molt each year to replace damaged or lost feathers. Waterfowl are unusual in that they replace all of their flight feathers at once, and so are flightless while they grow their new flight feathers. Adult Canada geese undergo this molt in late June and early July in Indiana. This usually takes about one month for each bird. Non-breeding yearlings, adults that don’t nest, and adults whose nests have been destroyed or didn’t hatch are usually the first to molt. Adults with young will molt at the brood rearing area shortly after the non-breeding geese initiate their molt. This allows the adults to regain flight at about the same time their young become flight-capable, about 70 days after hatch.

Canada geese select open areas near water and a food source to molt, putting themselves within walking distance of food and providing an unobstructed view to avoid danger. Farm ponds and pasture fields serve as excellent locations to Canada geese during this time. In urban areas, mowed lawns, parks, and golf courses suit their habitat requirements.

Canada geese are recognized for their large V-shaped flocks as they migrate south in the fall and north in the spring. Many people believe that “resident” Canada geese in Indiana do not migrate and are here year-round. However, evidence from banding breeding birds in Indiana shows that these geese spread out far more than most people think: Indiana-banded Canada geese have been harvested by hunters in at least 40 states and provinces. Indiana has Canada geese year-round, but they are often different geese at different times of the year.

The smaller, northern subspecies of Canada goose, such as the interior subspecies (Branta canadensis interior) that breeds around Hudson Bay, have more regular, longer-distance migrations. However, most Canada geese do not migrate until they are forced to do so by harsh weather (generally, snow that is deep enough to prevent field feeding on waste grain). Sometimes these interior geese will spend the winter as far north as southern Wisconsin, though in most years they make it to central Indiana and Illinois. Rarely do they go farther, though historically they went as far south as Wheeler National Wildlife Refuge in northern Alabama.

There are substantially fewer interior Canada geese than giants. This difference between the population sizes of long-distant migrant Canada geese from Canada and locally-breeding giant Canada geese complicates management of Canada goose populations. While Indiana’s local breeders can withstand a great deal of hunting pressure, and in some places population reduction might be beneficial, the Canadian migrants may need some protection from overharvest. Balancing those two opposing needs makes Canada goose management in Indiana a challenge.

Mortality of Canada geese decreases drastically after the birds reach adulthood. The survival rate of first year geese is variable, but it tends to be substantially lower than that of adult geese. Annual survival rates of Indiana-breeding adult Canada geese is greater than 90 percent, while annual survival rates of interior geese are closer to 70 percent. Many factors contribute to mortality of Canada geese, including predation, hunting, disease, starvation, and accidents (hit by vehicles, flying into power lines, etc.). In Indiana’s urban areas, low predator rates and a lack of hunting may inflate the number of first year geese that survive to adulthood.

The Canada goose population in Indiana has been stable overall since about 1999. Indiana’s goal is 80,000 breeding geese. The current breeding population estimate of Canada geese in Indiana is about 113,000, though it has fluctuated between 80,000 – 125,000 since 1999. The average estimate since 1999 is 102,500. This estimate does not include geese that migrate through Indiana each spring and fall. Breeding population fluctuations seem to be caused by flooding in spring: in years when there are heavy rains and flooding in late April, there are fewer geese the following year. When nests are destroyed that late in the breeding season (in this case by flooding), geese rarely try again that season, so there are far fewer young geese in the population the following year. For example, widespread spring flooding in 2012 and 2013 caused a large drop in the Canada goose population in Indiana, from 110,000 in 2011 to 82,000 in 2014.