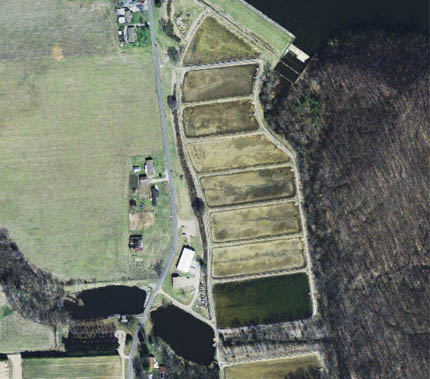 The Driftwood State Fish Hatchery, located in Vallonia, IN, in Jackson County, and constructed under the Works Projects Administration (WPA) in the late 1930's, this warm water facility consists of  earthen rearing ponds and one brood-fish holding pond. The rearing ponds range from 0.6 to 2.0 acres in size and provide a total of 11.6 acres for raising fish. Maximum depth of each rearing pond is approximately 5 feet. Five, 1,000-gallon linear raceways, housed in the fish culture portion of the office/service building, provide facilities for feed training, and fish holding.

The primary fish culture responsibilities of the hatchery are the production of Largemouth bass and Channel Catfish fingerlings for stocking in Indiana’s many public waters. However, most all warm-water and cool-water species can be produced at this facility. Species raised in the past include bluegill, redear sunfish, black crappie, walleye, hybrid walleye, northern pike, and muskellunge.

Starve Hollow Lake is the sole water supply to the hatchery. Water is drawn from a depth of approximately 6.5 feet and gravity fed to the hatchery ponds. The water is passed through a 382-micron mechanical strainer to prevent contamination with lake fish, which would compete with or prey on, those being raised. Water for the inside raceways is pumped from the brood-fish holding pond and/or Starve Hollow Lake.

The hatchery is funded entirely from the Fish & Wildlife Fund, which is comprised of monies generated from the sale of hunting, fishing, and trapping licenses. All monies spent for hatchery operation are eligible for 75% reimbursement from Federal Dingle-Johnson and Wallop-Breaux funds.

Need a reason to get outside and move? You can volunteer alone or in small groups at this property. Some activities include trash pick-up, basic gardening, painting, and more. Call the property office for details.