The introduction of black carp

Black carp are native to eastern Asia and were brought to the United States during the 1970-80s as a “contaminant” of grass carp shipments, as a food fish and as a biological control for parasitic trematodes in aquaculture ponds. They have since escaped captivity and have been spreading through the Mississippi River basin. In June 2019, two black carp were captured in the Ohio River about 10 miles downstream from the Indiana state line. In July 2019, three black carp were captured in the Ohio River just downstream of Newburgh Lock and Dam near Evansville, Indiana. 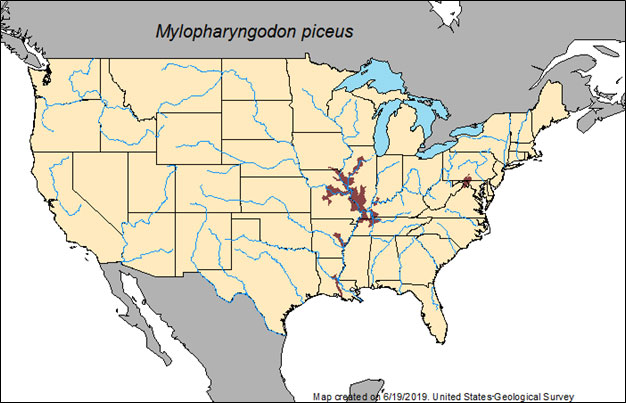 Figure 1: A range map of where black carp observations have been reported in the US. An interactive, detailed map of these observations is available from USGS at nas.er.usgs.gov/viewer/omap.aspx?id=d2f342bb-7627-46de-85e3-f4185562c717.

Black carp have a laterally-compressed, elongated body and have a pointed head with a terminal mouth. Their body is black, blue gray, or dark brown in color with a lighter belly and darkly pigmented fins. Black carp have large, overlapping scales with dark edges, giving the fish a cross-hatched appearance. They can reach up to 5 feet in length and a maximum weight of 150 pounds.

Overall black carp look extremely similar to grass carp, and can be hard to identify. Additional information on how to identify between black and grass carp can be found at:
www.asiancarp.us/Documents/BlackGrassCarpIdentification.PDF. 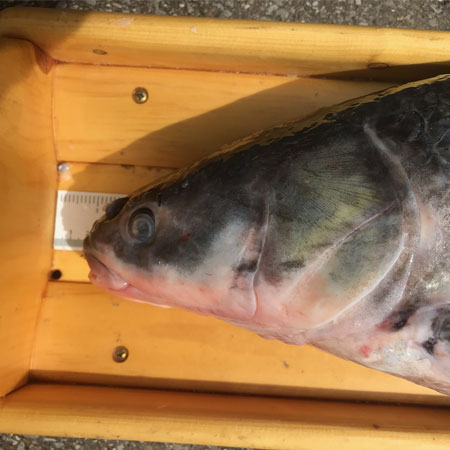 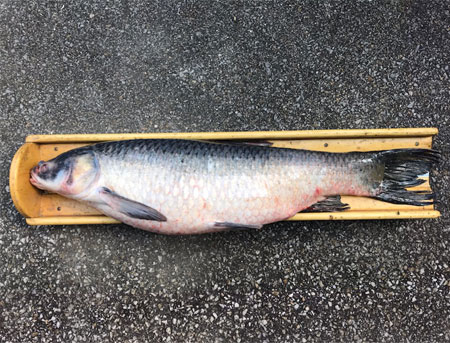 Life history and impact on our ecosystems

Black carp are typically found in large river floodplain systems and require flowing water to reproduce successfully. Similar to other Asian carp, reproduction takes place in late spring and summer in response to increasing water temperatures and rising water levels. Females are capable of producing hundreds of thousands to over 1 million eggs each year. The adults spawn upstream and their eggs drift downstream for one to two days before hatching.  Black carp become sexually mature at 4 – 6 years, and reportedly can exceed 15 years of age.

Adult black carp are bottom-dwelling fish that primarily feed on mollusks and snails. Individual black carp can eat 3 to 4 pounds of mussels a day, which poses a serious threat to Indiana’s mussel populations. Many of the mussel species native to Indiana are already listed as species of special concern or endangered. For more information about the important role mussels play in the state’s rivers, visit wildlife.IN.gov/8684.htm. Because of their feeding habits, black carp will compete for food with a variety of native fishes, turtles, birds, and even mammals (raccoons, otters, and muskrats).

What to do if you catch a black carp

While it is possible to catch black carp on traditional baits and by bowfishing, commercial fishers are most likely to encounter them due to their bottom-dwelling behavior. Black carp are an injurious species, so it is illegal to import, possess, or release them into public or private waters in Indiana. With increasing occurrences of black carp near and in Indiana waters, we urge you to report all suspected observations to the DNR. If you catch a suspected black carp, follow the KEEP, COOL, CALL procedure:

You may be eligible for a $100 bounty per black carp carcass, funded through the Illinois Department of Natural Resources. The biological information collected from the carcasses will help resource management agencies determine their origin, diet, and reproductive potential in the Midwest.