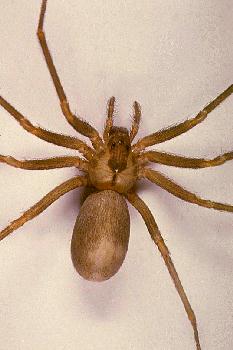 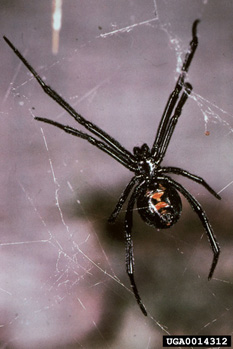 There are around 400 species of spiders known to occur in Indiana. Only two species found in Indiana are capable of inflicting serious injury to humans. While both the brown recluse and black widow spiders are known as venomous, neither is aggressive. Bites from them are quite rare.

Black widow spiders live in undisturbed locations and are rarely found in homes. The females will be active during the day on their irregular web, near ground level. Adult females are shiny black, have a red or yellow “hourglass” on their underside, and are about the size of a penny with their legs extended.

Brown recluse spiders are sometimes called “fiddle-back spiders” because of the violin-shaped marking on their back. The spiders, with legs outstretched, are about the size of a half dollar. They are one of few North American spiders with six eyes. Brown recluse are often found in barns, sheds or other dry places.

Fatalities from spider bites are extremely rare. Reactions to bites vary by the amount of venom injected and the patient’s age, health, and individual sensitivity. Subjects who have been bitten who experience severe pain, trouble breathing, dizziness or nausea should seek medical attention.