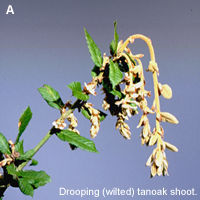 Sudden Oak Death (Phytophthora ramorum) is one of over 170 different species of water molds. While water molds have mycelium that grow over organic material digesting it as they grow, they are not true fungi. Water molds can reproduce asexually, so they readily spread when environmental conditions are favorable and food is plentiful. Phytophthora species cause crown and root rots. Species identification requires lab confirmation.

While most water molds need warm environments and specific hosts to thrive, the pathogen causing SOD needs cool temperatures and has a large host range, which increases its environmental and economic impact. P. ramorum has been found on over 100 different hosts, including broadleaf and conifer tree, shrubs, herbaceous plants and ferns. Rhododendron, azalea and oaks are common hosts. SOD infects only oak species in the red oak group, which includes red, Shumard, black, pin, and shingle oaks. It has not been found to infect the white oak group.

SOD was first identified in the mid-1990s. Its actual origin is unclear, but indications are that it is an exotic species that has been introduced to over 60 countries. First found in the U.S. in California in 1995, it has since had devastating effects on California coastal region forests and has been found in an isolated area in Oregon.

This pathogen is typically spread in shipments of nursery stock and other host material. During early stages of infection, plants can appear healthy, making identification of infected plants difficult, but when conditions become favorable (cool temperatures and a moist environment), SOD symptoms become more evident.

Symptoms of SOD vary depending on the host it is infecting. Leaf lesions and dieback on host material like rhododendron, camilla, azaleas and viburnum are common along with wilting. Symptoms on oaks will be different. Infection begins in the main trunk. Red-brown cankers and oozing sap may be seen on the main trunk. Leaves may quickly wilt on infected oaks. Tree death may occur within a couple of years.

While SOD is not known to occur in the Indiana landscape, plant material containing this pathogen has been intercepted in Indiana nurseries several times over the last decade.  If you suspect SOD, please contact the Indiana DNR Division of Entomology & Plant Pathology for assistance with identification and treatment options for this disease. 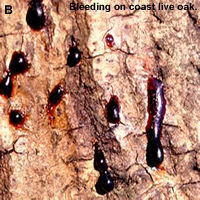