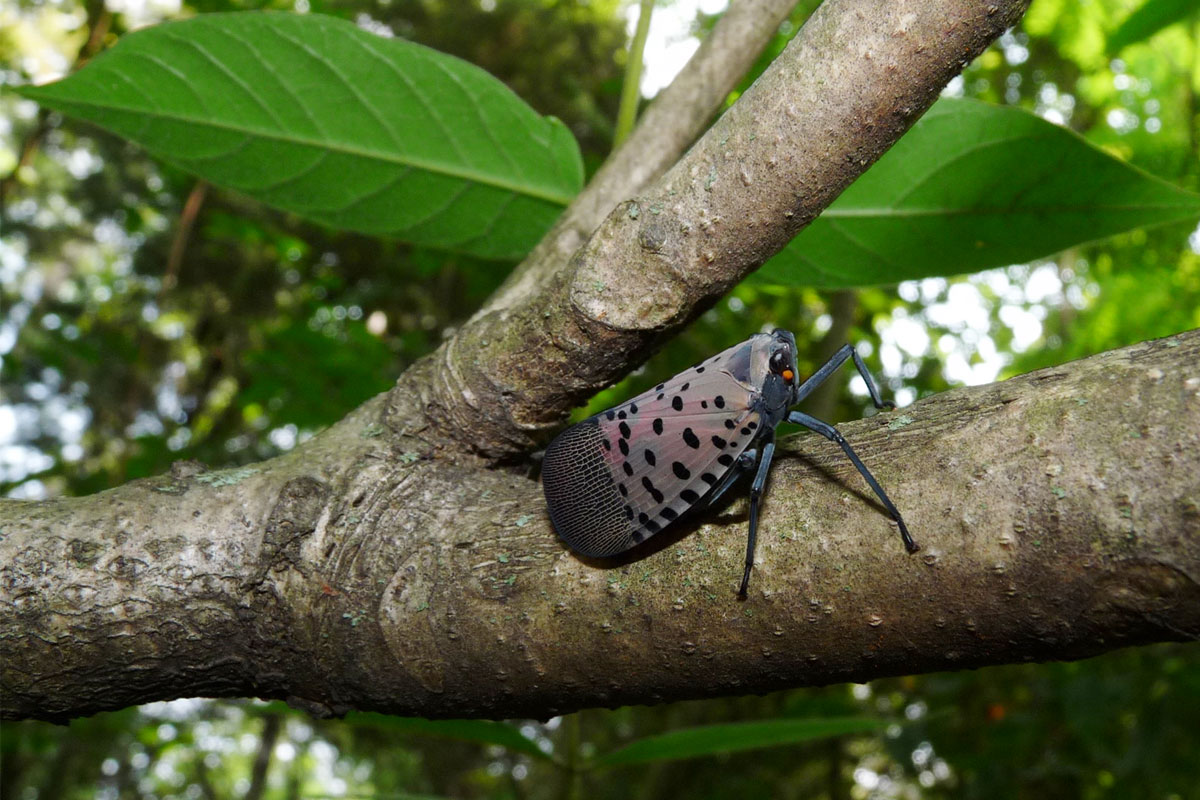 In July 2021, a population of spotted lanternfly (Lycorma delicatula) was identified in Switzerland County, Indiana near the Ohio River. DEPP and USDA are conducting surveys to ascertain the extent and source of the infestation as well as determine what management strategies will be implemented.

This insect is a planthopper with a distinctive wing pattern. Wings are held downward and folded when the insect is at rest. The forewings, which are visible in the resting position, are greyish with black spots and the wing tips show a network of veins. Part of the hind wings is red with black spots and the remainder is white and black. Adults are approximately one inch long from the head to the end of the folded wings. The abdomen is yellowish with black bands. Adults may not be seen flying (as they are weak flyers) but will likely be seen hopping or crawling.

Brownish-yellow seed-like eggs are laid in masses of 30-50. Eggs are laid in four to seven columns approximately an inch long and covered with a whitish gray waxy layer. As it ages, the waxy layer turns grayish brown and has the appearance of cracked mud.

Nymphs emerge in April or May and have four instars or growth stages. The first three instars are black with white spots. The fourth instar retains the white spots but has a red and black body with red wing pads. The first to fourth instar ranges in size from a 1/8 of an inch to a little over a half inch long.

The nymphs will climb into trees shortly after they emerge. They will drop off the trees when they encounter a physical obstacle or disturbance from the wind and start climbing up again. Fourth instar nymphs develop into adults in late June or early July. Adults continue to feed on plant tissues. Mating and egg deposition begin in September and continue until a hard frost.

Spotted lanternfly overwinters as an egg on the bark of trees, firewood, rocks, outdoor furniture, equipment, vehicles, or anything that is stored outside. This is especially a risk for items outside during that egg laying period. There is one generation per year.

Why is spotted lanternfly a problem?

Adults and nymphs have piercing-sucking mouthparts and feed on the vascular tissue of leaves, petioles, young shoots, branches and trunks of its hosts. Adults and older nymphs may feed in large populations. This extensive feeding results in oozing wounds on woody tissue and wilting and death of branches.

The spotted lanternfly can be spread long distances by people who move infested material. If allowed to spread, this pest could have serious impact on the grape, hops, orchard and logging industries in the United States.

The spotted lanternfly has a recorded host list of over 100 species, primarily woody species. Their preferred host is tree of heaven (Ailanthus altissima) which is a common invasive species in Indiana.

Inspection of areas and objects near tree of heaven should be a priority since this is a preferred host tree. Smooth surfaces are preferred for egg laying and eggs may be in sheltered locations or in crevices on trees or outdoor objects. Nymphs and adults tend to cluster at the base of trees or lower trunk during the day and are more active at dusk or early evening. Infested trees can show significant deposits of honeydew and sooty mold around the base of the tree to the point where the base and surrounding ground may appear black. Tree sap oozing from wounds on trees and the honeydew may attract ants, bees and wasps.

Inspection of articles such as logs, firewood, other tree parts, decorative grapevines, any outdoor household articles and vehicles coming from infested areas will assist in reducing the spread of this invasive pest long distances.