Crown gall is a plant disease caused by the soil bacteria Agrobacterium tumefaciens. 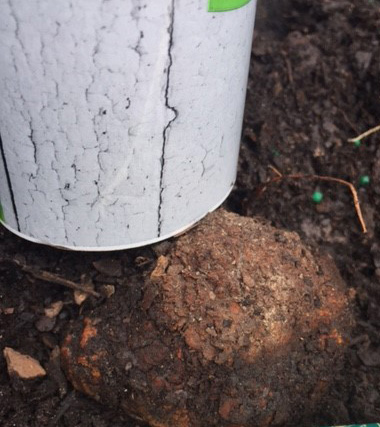 The most noticeable sign of infection is a rough, hard, black mass where the plants main stem meets the soil. The bacteria can infect plant tissue through pruning wounds, mechanical damage or insect feeding.

Occasionally crown gall appears on branches through contact with pruning tools. Once the bacteria infects the plant, it causes rapid, uncontrolled cell division which then forms a tumor or gall. The galls can disrupt nutrient and water movement within the plant and can cause structural weakness.

Prevention is the best control. Once an area is infected, it can be extremely difficult to eradicate the bacteria. New plant material showing signs of crown gall should be avoided. Be careful to avoid inflicting lower trunk injuries on plants such as those caused by mowers and string trimmers.

If crown gall is found after planting, the plant should be dug up along with all the soil immediately around the plant. Dispose of the plant via burning or burying in a landfill. All tools should be thoroughly cleaned and sterilized with rubbing alcohol. Allow the tools to sit for a full minute in the solution. Or, use a 25-percent bleach-water solution. If possible re-plant with a plant species that is more resistant.

Crown gall is a regulated pest in Indiana. Plant material showing symptoms of crown gall should be withdrawn from sale and destroyed.