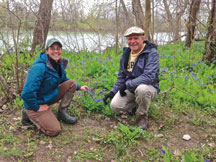 Liz Brownlee was involved in the Oak Heritage Conservancy (OHC) before she knew what the organization was.

While studying at Hanover College, she was among a group of students a professor invited to a tree planting. Brownlee and the other members who volunteered to participate worked in the pouring rain that day, digging and depositing seedlings on a remote property.

Years later—after Brownlee became the organization’s executive director—she found out the planting was an OHC event.

“One of my board members found an old picture of me at that event,” she said, “that’s when I started putting the pieces together.”

Brownlee is the land trust’s first paid employee. Working part-time, she’s made an impact on OHC’s operations since starting in 2015. OHC now protects 944 acres in 10 counties, with more land purchases on the horizon. She passionately shares what makes the region special while engaging residents in OHC’s properties, all while running a self-sustaining farm with her husband on her family’s property.

“Not for the faint of heart.”

That’s how Jim Brown, who lives in Bloomington, describes volunteering with Indiana’s statewide marshbird survey, and he ought to know.

On days he is conducting survey research, Brown needs to be at his site, Goose Pond Fish & Wildlife Area, before the sun rises so he can see the birds at their most active time of day.

That means getting out of bed at 4 a.m., making the one-hour drive to Goose Pond FWA, then embarking on a half-hour walk through the darkness without a trail, fighting grasses almost as tall as his 6-foot frame, sometimes nearly tripping in mud, with only a flashlight to guide him. Mosquitoes peck at him as he gets out his pad of paper and microphone.

But it’s worth the effort, both for Brown and for what his work and that of others will provide.

“It’s such a magical place when the sun begins to rise,” Brown said of the FWA. “The birds and wildlife start to wake up, you can start to hear the birds like American bittern calling, you have the blue, red and gold of the sunrise.

“I get goosebumps just thinking about it.”

Brown said the survey has let him discover that scene, which he may have missed had he not volunteered. As he enjoys the serenity of Goose Pond, Brown, along with dozens of other volunteers, is collecting valuable information that will help professional researchers keep part of the magic of that early morning alive.

A man in full camouflage clothing during deer firearms season was seen by DNR conservation officers coming out of the woods. The man was trespassing. And had no firearm.

Indiana Conservation Officer Matt Tholen and his partner, a chocolate Lab named Drake, who serve the Lafayette area, arrived to investigate what the other officers had seen, but the track was already two hours old.

The year was 2016. Tholen and Drake’s partnership was about a year old. Tholen knew Drake’s talents, but on this day Drake would surprise even him. The only evidence the partners had to work with was the spot where the man exited the woods.

Drake came upon several scents that caught his interest during a ¾-mile stretch along the Wabash River, and Tholen knew he was on a scent trail of some sort. Soon, Drake’s straight posture and pointed tail changed, and Drake led his partner to a scent pool, which is a spot, usually in a low area, where there is minimal dispersal of scent by wind. That’s where the suspect would turn out to be sitting.

Tholen took Drake off his lead and put his partner’s search collar on him.

Drake started his search pattern. He made circles and figure 8s, looking for anything out of place. Soon, Drake pawed at something on the ground. There, buried under leaves and sticks, was a firearm.

“I’m like holy cow, and my lieutenant was the same way,” Tholen said. “Drake just hit it out of this world; it was unbelievable.”

The suspect, a convicted felon, had hidden the firearm, which officers found out later his legal status prohibited him from possessing. That evidence helped make a case against the suspect, and he was sent to prison. Another suspect was convicted of purchasing the firearm for the individual.

Obviously, Drake was able to find that shotgun, despite the old trail and lack of other evidence, because of his keen sense of smell. General statistics help explain why. Dogs have up to 300 million olfactory receptors in their nose; human noses possess a measly six million. Also, the part of a dog’s brain that is devoted to analyzing smells is, proportionally speaking, 40 times greater than in a human brain.