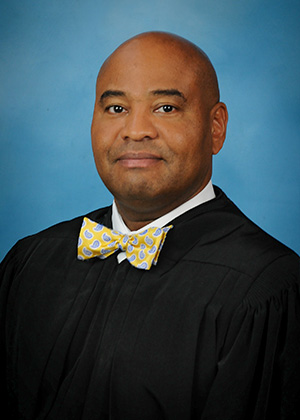 Judge Rudolph R. Pyle III was appointed to the Court of Appeals of Indiana by Gov. Mitch Daniels and took his seat on Aug. 27, 2012.

A native of Rhode Island, Judge Pyle graduated from Anderson University in 1992 with degrees in history and political science. Immediately following graduation from Anderson University, Judge Pyle began his studies for a Masters Degree at the Thomas Jefferson Program in Public Policy at the College of William & Mary in Williamsburg, VA. This course of study focused on the “institutions and processes of public policy, the economic foundations of policy analysis, quantitative and statistical methods for analyzing policy, and a variety of specialized policy topics.”

Graduating in 1994, Judge Pyle returned to Indiana to become an Indiana State Trooper. Serving nearly four years, the Judge served the people of Indiana by patrolling our highways, investigating crimes, training new Troopers, and serving on the Tactical Intervention Platoon.

In 1997, Judge Pyle began his study and training to become an attorney at Indiana University Maurer School of Law-Bloomington. While at Indiana University, the Judge was an Indiana Conference for Legal Education Opportunities fellow and worked as a legal advisor for the Bloomington Police Dept. He was also inducted into Who’s Who Among American Law Students.

Admitted to the Indiana bar in 2000, Judge Pyle served four years as a judicial clerk for the Honorable Carr L. Darden at the Court of Appeals. During this time, the Judge was immersed in Indiana law, assisting in the researching and writing of opinions touching on criminal law, medical malpractice, contract law, family law, and constitutional law. Judge Pyle also has taught Public Policy; American National Government; Constitutional Law; Law, Politics & Society; and Criminal Law as an adjunct professor at Anderson University. He also is an adjunct faculty member at Indiana University Maurer School of Law and is an occasional guest lecturer at the Justice Academy of Turkey.

In 2004, Judge Pyle was appointed as a Deputy Prosecuting Attorney in Madison County. As a deputy prosecutor, the judge prosecuted major felony cases such as attempted murder, conspiracy to commit murder, robbery, child molest, rape, burglary, and theft. During this time, Judge Pyle also opened a private practice and gained valuable experience representing clients in a variety of criminal, civil, and corporate matters.

In 2009, Judge Pyle brought new energy to the Madison County Judiciary when Gov. Daniels appointed him as Judge of Madison Circuit Court. In November 2010, Judge Pyle was elected and retained his seat on the bench. During his tenure, Judge Pyle presided over major felony trials, directed the installation of wireless internet access, promoted the increased use of technology, produced television commercials promoting jury service, and was an advocate of problem-solving courts.

Judge Pyle enjoys motorcycle racing, playing piano, martial arts, and competitive marksmanship. Judge Pyle is the son of Rudolph and Caroline Pyle, and is the proud father of his son Seth.