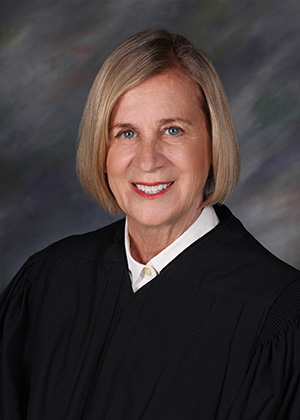 Nancy H. Vaidik is a judge and a teacher with broad experience in both trial and appellate courts and in legal classrooms. She has an expertise in trial advocacy and appellate advocacy, with a strong background in the rules of evidence and legal mediation.

Judge Vaidik was selected by her colleagues as chief judge of the Court of Appeals for a three-year term beginning Jan. 1, 2014.  She was re-elected for a second term as chief judge ending December 31, 2019.

Judge Vaidik grew up in Portage, Indiana, and is a sixth-generation Hoosier who retains strong ties to her hometown. She graduated with high distinction from Valparaiso University in 1977, with a double major in political science and psychology, and then studied at Valparaiso University Law School, where she earned her Juris Doctor in 1980.

Her early years as deputy and then chief deputy Porter County prosecutor provided the grounding for her judicial career. As an attorney, she tried over seventy-five jury trials and founded the Porter County Victims Assistance Unit, the Porter County Sexual Assault Recovery Project, the Domestic Violence Service, and the Valparaiso University Law School Mediation Clinic. She also served on the Porter County Community Corrections Board and led a countywide task force that spearheaded the eventual construction of a new county jail. After serving as a prosecutor, she went into private practice and specialized in domestic relations, probate, municipal law, and general litigation. She represented Caring Place, Inc., a shelter for battered women in Valparaiso.

From 1992 to 2000, she served as the judge of the Porter Superior Court. During her tenure on the trial court, Judge Vaidik was awarded a wide range of honors including the 1996 Indiana Domestic Violence Coalition Judge of the Year and the 1997 Indiana Judges Association Special Merit Award.

Judge Vaidik was appointed to the Court of Appeals in February 2000 by Governor Frank O’Bannon and was retained by election in 2002 and 2012. Because Judge Vaidik sees the Court of Appeals at the intersection of theoretical and practical law, she believes the Court should embody the highest degree of fairness and impartiality. This view informs her passion for teaching, as she feels that Hoosiers, and all litigants, deserve the finest possible legal advocacy on their behalf. Judge Vaidik also believes that legal writing must be distinguished by logical construction and clear, explanatory prose.

She is an adjunct professor at the Indiana University Maurer School of Law and won its 2011 Adjunct Professor of the Year Award. She has served as a visiting professor at the College of Law of England and Wales and taught as an adjunct professor at Valparaiso University Law School.  She has taught at many law schools and for a number of organizations including the Indiana State Bar Association, the Indiana Legal Education Forum, and the Indiana Judicial Center. Judge Vaidik has trained lawyers involved in prosecuting Rwandan war crimes, Mexican lawyers prosecuting drug lords, and solicitor advocates seeking the rights of the audience in the High Courts in Belfast, Northern Ireland. She is particularly proud of her long association with the National Institute of Trial Advocacy, which honored her with its 2007 Robert Keeton Faculty Award.  She is the co-author of the book, Point Well Made: Oral Advocacy in Motions Practice.

In addition to her Court of Appeals caseload and her teaching, Judge Vaidik is also actively involved in a wide variety of community, legal, and judicial organizations. She served on the State of Indiana Children’s Peak Performance Commission and has held many posts with the Indiana Judges Association and Indiana Judicial Center. She has been chairperson of the Judicial Education and Community Relations Committees of the Indiana Judicial Center and is a member of the American Bar Association, Indiana State Bar Association, and Sagamore Inns of Court.

She has received many other awards and honors including the 2004 Indiana State Bar Association’s Women in Law Achievement Award, the 2007 Indiana Lawyer Distinguished Barrister Award, the 2003 Paragon of Justice Award from Valparaiso University Law School, the Indianapolis Business Journal's Women of Influence, and the Sagamore of the Wabash Award from two Indiana governors.

Judge Vaidik and her husband are the proud parents of twin daughters, one a medical doctor and one a lawyer, and they have three grandsons and one granddaughter, who can choose either profession.