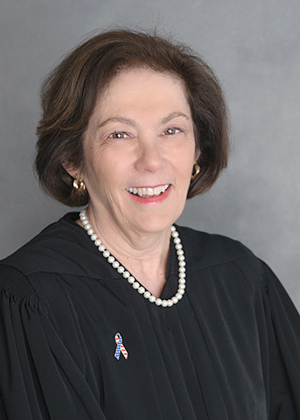 Margret G. Robb, the first woman elected Chief Judge in the 110-year history of the Court of Appeals, was appointed in July 1998 by Governor Frank O’Bannon. In 2012 she was honored, with a concurrent bi-partisan Resolution, by the Indiana Legislature. Previously she served as Founding Chair of Governor Otis Bowen’s Commission on the Status of Women.

Honored for her public service, some of Judge Robb’s awards include the Indiana University Robert H. McKinney School of Law Distinguished Alumni, Indiana Business Journal Woman of Influence, Indiana State Bar Association “100 Years of Women in the Legal Profession,” appointment to the ABA Committee responsible for accrediting law schools, and election as President of the national Council of Chief Judges of State Courts of Appeal.

Prior to her appointment to the Court, Judge Robb was, for 20 years, engaged in the general practice of law in Lafayette, and served as a Chapter 11, 12 and a standing Chapter 7 Bankruptcy trustee for the Northern District of Indiana. She was a registered family and civil mediator and served as a Tippecanoe County Deputy Public Defender.

Judge Robb chaired the Supreme Court Task Forces on Family Courts and the development of Trial Court Local Rules and is involved in several projects to benefit the Indiana legal system. She has also served as a member of the Indiana Board of Law Examiners, the Governance Committee of the Supreme Court IOLTA (Interest on Lawyer Trust Account) Committee; the Federal Advisory Committee on Local Rules for the Federal Court for the Northern District of Indiana; and the Federal Advisory Committee for the Expediting of Federal Litigation.

Judge Robb has written extensively on a variety of legal topics: “Reflections of Baseball, Life and the Law” in the Indiana State Bar Association’s journal, Res Gestae and “Running Bases, Winning Cases: Why the Grand Old Game of Baseball is like the legal profession,” in the ABA Journal. She also authored a chapter on Supreme Court Justice Leonard Hackney in Indiana Supreme Court Justices, a chapter on Judge Robert H. Staton, in an upcoming book on judges of the Indiana Court of Appeals, co-authored a chapter, “From Juvenile to Family Courts,” in Essays on Indiana Legal History; co-authored an article “Do You Want To Know a Secret? Do You Promise Not to Tell? Whoa OH OH: Judges, Opinions, and Judicial Notice” in the Indiana Law Review; and co-authored an article “Appeals on Wheels: Traveling Oral Arguments Boost Public Outreach,” in the ABA Judges Journal.

Judge Robb is a recipient of the 2001 Maynard K. Hine distinguished alumni award given in recognition of support and service to IUPUI and Indiana University. She has also been honored with the 2004 Bernadette Perham “Indiana Women of Achievement” Award , bestowed by Ball State University to honor of one of their outstanding professors; the 2005 Indiana State Bar Association’s Women in the Law Recognition Award; the 2006 Tippecanoe County YWCA Salute to Women “Women of Distinction” Award; the 2007 Warren G. Harding High School, Warren, Ohio, Distinguished Alumni Award the 2010 Indiana University Alumni Association President’s Award, a 2010 Indiana Lawyer Distinguished Barrister Award, the 2011 Indianapolis Bar Association Women and the Law Committee’s Antoinette Dakin Leach Award, the 2011 David Hamacher Award from the Appellate Practice Section of the Indiana State Bar Association, a 2012 Indiana Business Journal Woman of Influence award, a 2014 Indiana Women’s Commission Trailblazer award, one of five women to ever receive the special recognition as a “Trailblazer,” a 2014 Indiana University Robert H. McKinney School of Law Distinguished Alumni award, and a 2018 Indiana State Bar Association Litigation Section’s Judicial Civility award.