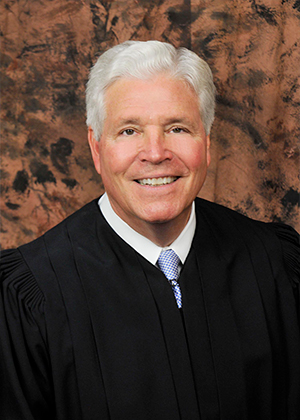 He then practiced law in Bloomington as a partner in Baker, Barnhart and Andrews, and later served for 13.5 years as judge of Monroe County and Monroe Superior Courts. In that time, he disposed of more than 15,000 cases – solid preparation for the more than 5,000 majority opinions he has written for the Court of Appeals.

In 2013, Judge Baker retired after 33 years of teaching at the School of Public and Environmental Affairs, Indiana University-Bloomington. He retired in 2015 after teaching a class for foreign lawyers at Indiana University McKinney School of Law for over 10 years. He has also served on the faculties of the Indiana Judicial College, Indiana Continuing Legal Education Forum and the National Institute of Trial Advocacy.

Judge Baker has long been interested in court and judicial reform and history. He’s been a member since its inception of the Strategic Planning Committee of the Judicial Conference of Indiana, which is charged with improving people’s access to Indiana courts and the quality of their experience there. In 2012, Judge Baker was appointed by the Indiana Supreme Court to a task force evaluating operations and procedures in Marion County Small Claims Courts. The task force’s report to the Supreme Court formed the basis recently adopted by the General Assembly.

Judge Baker received his LLM from the University of Virginia in 1995 and is a member of the American, Indiana State, Monroe County, Boone County, and Indianapolis Bar Associations. He served on the Indiana Judges’ Association Board of Managers from 1979 through 2011 and was its president from January 1987 through June 1989.

Judge Baker was a Captain in the U.S. Army Reserves and remains active in his community, his church, and the Boy Scouts of America, where he attained the rank of Eagle Scout as a youth. In 2011 he joined the Board of Trustees of Garrett-Evangelical Theological Seminary in Evanston, IL, where he serves on the Academic Affairs Committee.

Judge Baker was retained on the Court of Appeals by election in 1992, 2002 and 2012. He and his wife have six children and, so far, 11 grandchildren. He is an avid reader, rower, and Nordic walker.