Blair Milo currently serves as the State of Indiana’s first Secretary for Career Connections and Talent. Appointed by Indiana Governor Eric Holcomb into the position created by Executive Order in August of 2017, Secretary Milo serves as the state’s Chief Talent Officer as Indiana works to fill an estimated one million job openings over the next ten years. She also serves on the Governor’s Workforce Cabinet, a body dedicated to shaping education and workforce training for a 21st Century workforce.

Prior to her appointment to Governor Holcomb’s Cabinet, Secretary Milo served as Mayor of La Porte, Indiana after being first elected in 2011 and reelected in 2015. During her time in office, Mayor Milo focused her administration on building the most conducive climate for economic development growth, providing for sustainable infrastructure needs and fostering a community dedication toward positive lifestyle choices. During her time as Mayor, 1,100 new jobs and over $260 million in new investment were created. Major projects contributing to this were the 137-acre expansion with dual rail service to the Thomas Rose Industrial Park; the commercial redevelopment of NewPorte Landing, a brownfield in the center of the city; and the largest single jobs expansion project in La Porte’s history: the addition of a second plant at Alcoa Howmet. The new Alcoa (now called Arconic) plant makes La Porte home to the most advanced aeronautical manufacturing facility in the world. In early 2012 Mayor Milo formed a partnership with the City, La Porte County YMCA and IU Health La Porte Hospital to create “Fitness Fridays,” a community fitness program that included a weekly 5k walk/run with the Mayor. In 2014 Mayor Milo initiated “Step Up Saturdays” where she traveled to a city or town in all 92 counties across Indiana to initiate a similar free 5k walk/run program to help improve Indiana’s overall health. As a result, over 25 percent of participating communities intended to continue the concept and in early 2017 Mayor Milo was named “Elected Official of the Year” by the Indiana Parks and Recreation Association.

During her time as Mayor, Secretary Milo was appointed by then-Indiana Governor Mike Pence to the State Workforce Innovation Council where she chaired the Career Counseling Task Force. In April 2017 she testified before the U.S. House of Representatives Republican Policy Committee on the challenges and opportunities before the American Worker. She was a member of Governing Magazine’s 2017 Women in Government Leadership Series made up of 25 elected women from across the country. Secretary Milo serves on the Indiana Advisory Alliance for the U.S. Global Leadership Coalition and the Board of Governors for the Richard G. Lugar Excellence in Public Service Series. 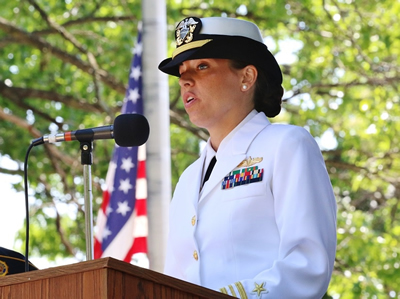 Prior to her roles in public service, Secretary Milo served as a Surface Warfare Officer in the U.S. Navy. She first served as the Anti-Submarine Warfare Officer then as Electrical Officer in USS Mason (DDG 87) from January 2005 until May 2007, completing two Persian Gulf deployments. She then transferred to the Destroyer Squadron 50 staff based in Manama, Bahrain and served as the Assistant Operations Officer, daily scheduler for the Northern Arabian Gulf battle space, Public Affairs Officer and as Tactical Watch Officer for the Commander. After serving in Bahrain and Iraq, Milo transferred to the Chief of Naval Operations staff at the Pentagon where she worked on the Navy’s newest stealth destroyer ship class, DDG-1000, in addition to serving as the Admiral’s Aide and Special Assistant to the Director of Surface Warfare. In July 2010, Milo transitioned from active to reserve duty where she first served as a Surface Warfare subject matter expert at the Office of Naval Intelligence before transferring to the NATO Warfare Development Group in Great Lakes, IL. She was awarded the 2017 American Legion Military Person of the Year (Reserve Category) for the State of Indiana.

Blair Milo was born and raised in La Porte, Indiana and graduated from La Porte High School. She attended Purdue University where she earned a Bachelor of Arts degree in Political Science and a commission as an Ensign in the United States Navy in 2004. In 2010, she earned a Master’s Degree in Legislative Affairs from the George Washington University.