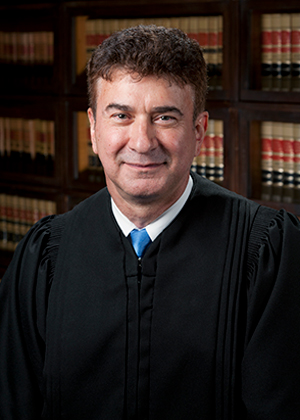 While Justice David’s military career has taken him all over the world, he has strong ties to Indiana. His ancestors settled in southern Indiana in the late 1700's and early 1800's. He was born in Allen County, raised in Bartholomew County and has lived in Boone County for twenty-two years.

Following his graduation from law school in 1982, he served in the United States Army Judge Advocate General's Corps on active duty until 1986 and reserve duty until 2010. His service included two post 9-11 mobilizations in Iraq and Guantanamo Bay, Cuba. He served as trial counsel, defense counsel, Military Judge and Commander. He graduated from the Army's Command and General Staff College, the Military Judges School, and the Judge Advocate General's Basic and Advanced Officer's Course.

His dedication to the military, pro bono services, and the rule of law earned him a number of military and citizen awards including the nation's third highest non-combat medal, the Defense Superior Service Award. He also earned multiple Meritorious Service Awards, Army Commendation Medals and the Frederick Douglas Human Rights Award. He retired from the military in November 2010 with the rank of Colonel.

Justice David’s civilian legal career started in Columbus, where he focused on personal injury, family law, and civil litigation. He later became in-house counsel for Mayflower Transit, Inc before moving to Boone County where he was elected Circuit Court Judge and named Boone County's Citizen of the Year, in 1999.

As a trial court judge, he presided over civil, criminal, family and juvenile matters. He testified before the Indiana General Assembly on juvenile law and is a recipient of the coveted Robert Kinsey Award as the most outstanding Juvenile Court Judge in Indiana. His efforts to improve the availability of mental health services for children led to his recognition by the Indiana chapter of the National Alliance for the Mentally Ill.

Justice David took the oath of office as Indiana's 106th Supreme Court Justice in October 2010 after being appointed by Governor Mitch Daniels. He was retained by voters in 2012.

Justice David serves as co-chair for the state's Juvenile Detention Alternatives Initiative ("JDAI") and also co-chairs the Program Committee for the Indiana State Bar Association's inaugural Leadership Development Academy. He is a frequent speaker and writer on various legal topics and an adjunct professor at the University of Indianapolis and Indiana University’s Robert H. McKinney School of Law.

He currently serves as President of the Community Foundation of Boone County and has previously served on both the Zionsville and Lebanon Boys and Girls Clubs' Board of Directors. He enjoys participating in marathons and triathlons, reading and golf. He has hiked the Grand Canyon three times. One hike included the Boone County Bar Association and another was a family hike. The production crew of the television program 48 Hours followed the David Family and reported on their endeavor to the bottom of the canyon.

Justice David's chambers may be reached by contacting his Judicial Administrator Sandy Knox at 317-232-2547 or sandy.knox@courts.in.gov. All media inquiries should be directed to the Chief Public Information Officer Kathryn Dolan at 317-232-2542 or kathryn.dolan@courts.in.gov.