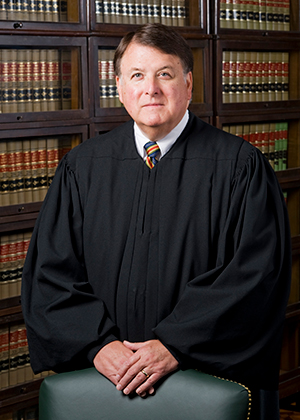 Randall T. Shepard of Evansville was appointed to the Indiana Supreme Court by Governor Robert D. Orr in 1985 at the age of 38. He became Chief Justice of Indiana in March 1987 and retired from the Court in March 2012, at which point he was the longest-serving Chief Justice in Indiana history and the senior Chief Justice in the country’s state supreme courts.

Shepard was Judge of the Vanderburgh Superior Court from 1980 until his appointment. He earlier served as executive assistant to Mayor Russell Lloyd of Evansville and as special assistant to the Under Secretary of the U.S. Department of Transportation.

He teaches periodically at the law schools of Indiana, NYU, and Yale.

He is married and has one daughter.

Since leaving the Court, Shepard has served as a Senior Judge in the Indiana Court of Appeals and as Executive in Residence at I.U.’s Public Policy Institute. He now chairs the ABA Task Force on the Future of Legal Education and has become a director of Old National Bancorp.