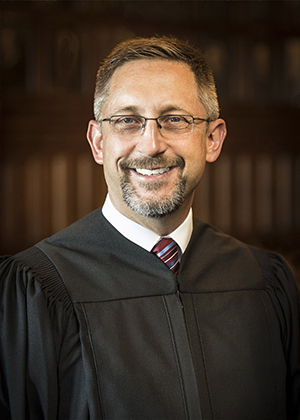 Christopher M. Goff was appointed to the Indiana Supreme Court by Governor Eric J. Holcomb and took the oath of office as Indiana’s 110th justice on July 24, 2017. He was retained by voters in 2020.

Justice Goff then left private practice to serve as Wabash County Superior Court judge for twelve years. During this time, he established the Wabash County Drug Court, Wabash County Family Recovery Court, and Wabash County Reentry Court. Justice Goff served on the Board of Directors of the Indiana Judicial Conference, representing Wabash, Huntington, Wells, and Adams Counties. He also chaired the Protection Order Committee of the Indiana Judicial Conference, which provides guidance to judges, lawyers, and individuals around the state. All told during his time on the trial bench, Justice Goff disposed of over thirty thousand cases and had only one decision overturned on appeal.

Since joining the Indiana Supreme Court, Justice Goff has continued serving his fellow Hoosiers. He led a successful statewide initiative to expand Family Recovery Courts in Indiana, nearly tripling the number of programs in just two years. In May 2020, he was appointed to serve as Chair of the Indiana Justice Reinvestment Advisory Council (JRAC). He also serves or has served on the Indiana Task Force on Public Defense, as the Indiana Supreme Court Liaison to the Problem-Solving Court Committee of the Indiana Judicial Conference, as Chair of the Allen County Judicial Nominating Commission, as a member of the National Judicial Task Force to Examine State Courts’ Response to Mental Illness, and as Chair of the Appellate Judges Educational Institute’s 2022 Annual Summit. He is also an adjunct professor of law at the Indiana University McKinney School of Law where he teaches on problem-solving courts.

Institutions around the state have recognized Justice Goff’s efforts. In 2018, the Bowen Center presented him with its Centennial Award for working to establish a culture of mental health in Northeast Indiana. Ball State University recognized him as one of its Graduates of Distinction. In 2020, Indiana University presented him with its Bicentennial Medal in recognition of his distinguished service. Also in 2020, he received an award from the Indiana Sheriff’s Association for his leadership and dedication during the COVID-19 emergency.

Justice Goff and his wife, Raquel, have been married since 1993. They have four children and three grandchildren. In his spare time, Justice Goff enjoys laughing with his family and friends. He also runs ultra-marathons.

Justice Goff's chambers may be reached by contacting his Judicial Assistant Michelle Shorter at 317-232-2546 or michelle.shorter@courts.in.gov. All media inquiries should be directed to the Chief Public Information Officer Kathryn Dolan at 317-232-2542 or kathryn.dolan@courts.in.gov.