What is Natural Gas? 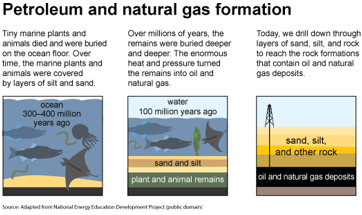 Natural gas is the earth's cleanest fossil fuel and is colorless and odorless in its natural state. It is composed of four hydrocarbon atoms and one carbon atom (CH4 or methane). Once natural gas has been generated by nature, it tends to migrate within the sediments and rocks in which it was created, using the pore space, fractures, and fissures that occur naturally in the subsurface. Some natural gas actually makes it to the surface and shows up in seeps, while other gas molecules travel until they are trapped or impeded by impermeable layers of rock, shale, salt, or clay. These trapped deposits are the reservoirs where we find natural gas today.

How Much Natural Gas Do We Use?

Natural gas is measured in British thermal units or Btu. One Btu is equivalent to the heat needed to raise the temperature of one pound of water by one degree Fahrenheit. A cubic foot of natural gas holds a lot of power, about 1,032 Btu. The unit you see on your gas bill holds even more power: most natural gas bills measure gas in therms, which is a unit of heating equal to 103,200 Btu. Think about how much hot water that is!!! In fact, a therm is enough to provide almost 2.5 days of hot water for your household; and two therms can warm your home for a full day. Ten therms of natural gas is about enough to meet the natural gas needs of an average home — space heating, water heating, cooking, etc. — for five days.

The future supply of domestic natural gas continues to grow due to the emergence and advancement of key technologies that unlock gas production from reservoirs such as shale formations. The Potential Gas Committee (PGC) assessment at year-end 2018 found that the United States has a natural gas resource base of 3,374 trillion cubic feet (Tcf). The biennial assessment shows the highest resource evaluation in the Committee’s 54-year history, exceeding the 2016 assessment by approximately 20 percent - the largest two-year increase in the report’s history.

About 20 percent of all-natural gas consumed during the winter is supplied by underground storage. Underground storage of natural gas is an integral component of the nation's energy system, and our nation's significant storage capacity enables utilities to offer natural gas to consumers throughout the year with reliable service.