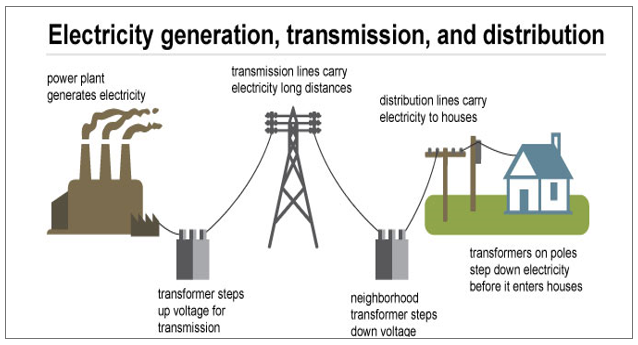 Electricity powers our daily lives and is available when we need it. There is a complex system of networks and a power grid- an interconnected system- that keeps electricity flowing to our homes and businesses at any given moment, on any given day. There are many different sources of energy that together, ensure reliability across Indiana and the region and that the Grid stays resource adequate and the overall cost of electricity for Hoosiers remains affordable.

Here is a simplified, high-level illustration of how electricity is generated and moved where it’s needed, Hoosier homes and businesses.

Indiana has a broad range of electric providers that supply, transmit and distribute electricity to end-use consumers. These companies are unique and vary by size, geography, scale of operations, and characteristics. All of them, however, serve the public interest and ensure a reliable, affordable and stable portfolio of electricity for consumers.

The 3 types of utilities that serve end-use consumers in Indiana include investor-owned (IOUs), rural electric membership cooperatives (REMCs) and municipally-owned utilities. Discover who your utility is and read more about each company by clicking on the links.

We call any mechanism that operates in this manner a generator. Energy resources, such as wind, solar or natural gas, power these generators by rotating a turbine that is attached to the shaft of the generator. For example, wind blows and rotates those huge turbines as seen in wind farms. The turbines then rotate the shaft of the generator, which causes the magnet to rotate inside the wires and creates electrical energy. This process is the first step in delivering electricity to consumers and is performed by electricity generators at power plants. From power plants, electricity is then transported to homes and businesses through transmission and distribution wires.

Coal: Coal is a black or dark brown rock consisting mainly of carbonized (converted into carbon, typically by heating or burning, or during fossilization) plant matter, found mainly in underground deposits that must be mined. Energy is created from coal through burning it to produce heat. This combustion takes place in a furnace with a boiler. The furnace heat converts water to steam, which then spins turbines, which turn a generator to produce electricity.

Nuclear: The primary source of energy for nuclear power is uranium. In a nuclear energy facility, heat is produced from splitting uranium atoms – a natural process called nuclear fission. As with other resources, the heat creates steam and the steam turns a turbine connected to a generator.

Hydro: Hydroelectric power uses falling water to produce electric power. Hydroelectric power plants usually have dams that block water from freely flowing on its normal path. Instead, water flows through a small, narrow passageway. As the water is forced through this narrow passage, the flow of water speeds up and is forced through a turbine, which spins as the water rushes through it. The turbine is connected to a generator shaft, which turns the generator and creates electrical current.

Wind: The blades of a wind turbine capture the energy in wind. The wind causes them to rotate (similar to blowing on a pinwheel). The rotation of the turbines is tied to a generator that produces electrical energy.

Solar: Solar energy generation begins with sunlight captured by a solar panel. You may have seen the large, often rectangular panels on the roof of a home or business or in a large group on the ground. These panels contain crystals that, when struck by sunlight, produce an electrical current.

Captured Methane: Methane gas is captured from landfills or other sources as trash decomposes. The methane rises to the top of the landfill and is collected in pipes; then it produces electricity when it is burned.

Pumped Storage: Water is pumped into a reservoir. During peak demand hours, water flows down from the plant reservoir to generate electricity.

Biomass: Biomass is derived from organic materials such as scrap wood, crops and some types of waste residues. It can be used to generate heat and electricity. Biomass fuels can be solids, gases or liquids that result from living organisms or from the byproducts of human activities.

Solid Waste: Energy is produced from solid waste by burning the waste as a fuel. 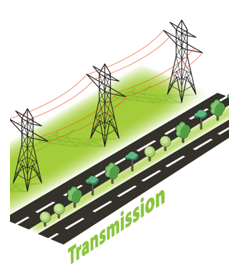 Transmission and distribution refers to different stages of transporting electricity over wires and poles from generators to a home, school or a business. The primary distinction between the two is the voltage level at which electricity moves in each stage.

After electricity has been generated, a system of electrical wires carries the electricity from the source of generation to our homes and businesses. These lines can be found overhead or sometimes in the ground and, combined, transmission and distribution lines make up what is commonly referred to as “the grid.” Transmission and distribution are two separate stages or systems on the grid.

In most cases, the energy moving through the transmission system must be reduced to lower voltage levels by electricity distributors before it can be delivered to a residence or business. Energy, specifically the voltage level, sent through transmission lines is reduced, or ”stepped down,” via transformers and sent through distribution lines, which are then connected to homes and businesses. 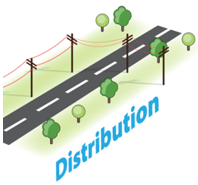 If transmission is the interstate highway of the grid, distribution is the local neighborhood and city street. It is the last leg of the delivery of electrical power from generation to the consumer. Energy travels on the distribution system at a voltage level that can be delivered directly to a home or business. Distribution lines are the lines many people see along streets. Distribution is the power that turns on and runs the appliances we use every day to keep our food fresh, our clothes clean and our homes either cool or warm. The voltage of distribution lines – the lines many people see in their neighborhoods – is approximately 13 kV (13,000 volts); a typical household runs on 110 volts.

In addition to substations, the distribution system includes wires, poles, metering, billing, and related support systems involved in the retail side of electricity delivery.

As electric companies invest in distribution system upgrades and enhancements, they are focusing on new technologies to help them meet the increased demands of our digital society and to communicate more effectively with their customers. The increased capital expenditures are helping companies to modernize their distribution systems, maintain reliability and ensure that new resources are able to interconnect in a timely and affordable manner. 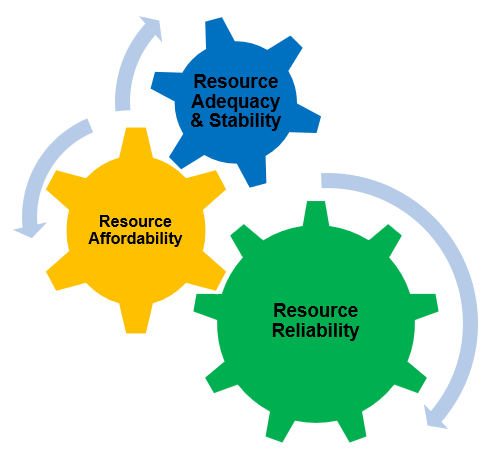 With utilities making annual capital expenditures of more than $130 billion on behalf of customers, considering the full range of investment options across the electricity system is essential for cost-effectively meeting current and emerging grid needs such as increased flexibility and resilience.

Emerging technologies, consumer rate impact, the retirement of conventional resources, data collection, visibility and transparency between transmission and distribution system interfaces, and federal and state policies are just some of the drivers of investment decisions. These investments increasingly require regulatory and policy innovation and a greater emphasis on planning to overcome system complexities and avoid unnecessary costs associated with operating the grid.

With greater alignment of resource and distribution system planning, states and utilities could:

With the growing decentralization of resources through increased customer installation of DERs, electricity planning needs to account for the quantity, location, capabilities, and load shapes of resources added to the distribution system and the bulk power system.

In Indiana, electric utilities, also known as load-serving entities are responsible for making sure they meet customer demand. To learn more how about resource planning occurs, check out www.in.gov/urc.