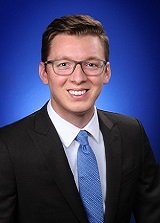 David Ober was appointed by Governor Eric Holcomb on April 2, 2018, and was reappointed by Governor Eric Holcomb on January 24, 2020. He serves as Chair of the National Regulatory Research Institute Board of Directors, Co-Vice Chair of the NARUC Committee on Water, and is a member of the Mid-America Regulatory Conference. He also serves as President of the Organization of PJM States, Inc. (OPSI) and is a member of the Electric Policy Research Institute (EPRI) Advisory Council.

Prior to his appointment, Commissioner Ober served House District 82 in the Indiana House of Representatives representing Allen, Elkhart, LaGrange, Noble and Whitley counties (2012-2018).

Commissioner Ober has held a variety of leadership positions throughout his career in state government, including service as a member of the House Ways and Means Committee, as Assistant Majority Whip for the House Republican Caucus (2014-2016), and as Chairman of the House Committee on Energy, Utilities and Telecommunications from 2016 to 2018.

Commissioner Ober is a 2009 graduate of Purdue University Northwest. He and his wife Maggie reside in Zionsville, Indiana and attend Traders Point Christian Church.