While gangsters such as John Dillinger plagued the country back in the late 1920’s and early ‘30’s, their exploits did prompt some “progress” in Indiana State Police communications. Even though Dillinger had been killed by the FBI in July of 1934, Indiana still ranked fourth in the nation in bank robberies. That same year the Indiana Banker’s Association and the Governor’s Contingency Fund set out to raise money to create a statewide short wave radio network. The goal was for this network to develop a communications link between law enforcement agencies. The pursuit of Dillinger and other criminals was greatly hampered by the lack of an effective statewide communications system.

The original method of communication between trooper and district headquarters amounted to the trooper having regular stops on his patrol route where he called in by telephone at designated intervals to receive dispatch information. Fortunately, by the end of 1934 nearly $50,000 in necessary funding had been raised to implement the new communications system.

In 1935, five Western Electric AM transmitters were put in place in Indianapolis, Columbia City, the Culver Military Academy, Seymour, and Jasper. The first message was sent out on May 6, 1935 reporting a stolen vehicle in Ligonier. These new stations were given call letters similar to what radio stations use today. While this new system was a vast improvement over the previous method, this system was still a one-way communications system. The trooper could only “receive” dispatches; he couldn’t respond back via radio to confirm receipt of the message. The dispatches were communicated three times to ensure a trooper received the message. The trooper would then have to find a telephone and call in to confirm he had received the dispatch and was able to get further details if necessary.

In 1937 a Continuous Wave (CW) network using Morse Code for communications between state and local law enforcement was in place. A good CW operator could send and receive anywhere from 40 to 50 words per minute. This helped relieve some of the load on voice transmissions. Unfortunately, skilled CW operators were hard to find. Despite the lack of skilled CW operators, the CW system soon provided an effective communications link between not only ISP and local law enforcement; it provided an interstate law enforcement communications link as well. Because CW transmissions were monitored by numerous stations simultaneously, information could be disseminated more quickly and with less expense than making numerous telephone calls. 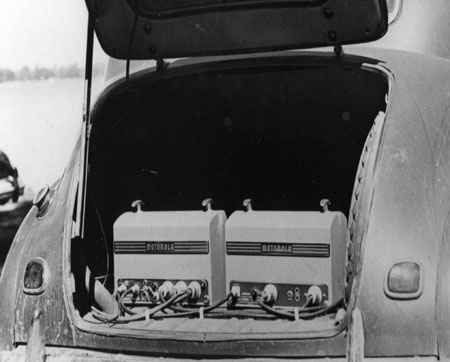 It was around World War II when the Indiana State Police began installing two way radios in its patrol cars so troopers were able to respond to radio dispatches directly from their cars. Also, by 1947 the Amplitude Modulation (AM) radios in use at the time became obsolete and ISP replaced those radios with a more reliable system known as Frequency Modulation (FM). The “new” FM system was a “noise free” transmission system while the AM system was not. 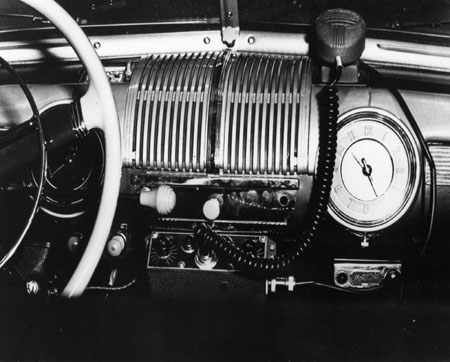 Shortly thereafter CW stations began to fade away as new communications networks were being established nationwide using telephone circuits as transmission media. Included among these “new” networks was the National Law Enforcement Telecommunications System (NLETS). The Indiana State Police became affiliated with this network in 1966 which increased the speed of handling messages at a rate of over 100 words per minute. In addition, the new system left less of a chance for error than the CW system.

In 1968 the National Crime Information Center (NCIC) was developed. A computer located in Washington, D.C. served as a central repository to store information on wanted persons and stolen vehicles from law enforcement agencies all over the country. This new technology enabled law enforcement agencies nationwide to enter wanted persons or stolen vehicles into the database, thus increasing the chances of apprehension even if the suspect traveled out-of-state.

In 1977 engineers from the Indiana State Police Communications Division developed a portable radio repeater system. In addition to this new communications technology, they developed a mutual aid communications system known as the Indiana Law Enforcement Emergency Network (ILEEN). Now for the first time there was a system in place where troopers could have direct radio communication with officers from local police and sheriff departments. Not only did this system enhance the effectiveness of inter-department communications, it provided the public with more efficient law enforcement service and improved officer safety.

This communication system stayed in place for many years without any great advances in communication technology. Then in 1990 the Indiana State Police began testing an 800 MHz radio system which provided a much clearer, more efficient, and more advanced means of communication. The Lafayette District was selected as a testing district for the new system. By the end of April, 1992 Indianapolis, Pendleton, Terre Haute, and Putnamville Districts were also brought on line with the 800 MHz system. While those five districts were able to communicate via 800 MHz it was still necessary for those districts and their troopers to continue to monitor the low band frequencies to ensure communications between troopers and districts not yet equipped with the 800 MHz system.

In 1999 the Indiana General Assembly created the Integrated Public Safety Commission (IPSC) to coordinate both voice and data communications as well as other multi-agency public safety issues. In 2000 a project known as Hoosier Safe-T (Safety Acting For Everyone Together) came to the forefront as a result of the creation of the IPSC. While this system was in the developmental stages in the late 1990’s, the importance of such a communications system with interoperability between police, fire, EMS, public utilities, and other governmental agencies became ever greater after the terrorist attacks of September 11, 2001. Work on the new system was given top priority and was phased in to each ISP district over the last several years with the last districts and enforcement personnel being upgraded to 800 MHz by March of 2007.

The 800 MHz system is now operational statewide and frequencies and talk groups are available to all law enforcement agencies, fire departments, EMS, local public utilities, as well as other governmental agencies. This system allows for direct communication between all agencies and their personnel in case of an emergency that requires multi-agency response. It also allows for multi-agency communication across state lines in case there is an incident or emergency occurring near a state line involving emergency responders from different states. It is because of the vision of the Indiana State Police back in the 1990’s that the state of Indiana is so advanced in statewide communication interoperability. 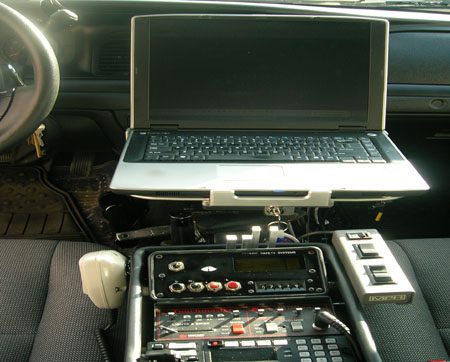 Over the last 75 years the Indiana State Police has come a long way from the trooper having to make stops along his patrol route to call the post for assignments. With the technology available today a trooper not only transmits and receives dispatch information via 800 MHz radio, information can even be transmitted and received between dispatch and a laptop computer installed in the trooper’s car. Keeping up with continued advances in communication technology makes the Indiana State Trooper more efficient but more importantly, they can provide better service to the public.