"As Real as it Gets"

Muscatatuck Urban Training Center (MUTC) offers users a globally unique, urban and rural, multi-domain operating environment that is recognized as the Department of Defense’s (DOD’s) largest and most realistic urban training facility serving those who work to defend the homeland and win the peace.

The multi-domain environment includes a physical metropolitan infrastructure, a 1,000 acre urban and rural landscape with more than 190 brick-and-mortar structures with roughly 1.5 million square feet under roof, 1.8 miles of subterranean tunnels, a cave complex, more than nine miles of roads, managed airspace, a 185-acre reservoir, and a cyber live-fire range. The Cyber Training Center is capable of supporting live offensive and defensive operations for all three tenants of multi-domain operations (MDO) at any echelon through live/virtual/constructive (LVC) training platforms. This integrated MDO environment touches the 21st Century battlefield domains of land, air, maritime, cyberspace and space and includes the electromagnetic spectrum and information environment. As users regularly add role-players to create dense urban terrain (DUT), the unpredictable realism slows operations while increasing the speed and complexity of tactical engagements.

The state of Indiana owns Muscatatuck and leases it to the U.S. Army. The National Guard manages the property as the premier advanced urban training facility used by military; local, state and national agencies; civilians and international partners.

Provide our customers with a complex urban environment as the best-value solution – clearly  the most realistic and fully-integrated, yet fiscally responsible – for live, virtual, or constructive training, developmental testing and evaluation throughout the five domains of land, air, maritime, cyberspace and space, as well as the electromagnetic spectrum and information environment, for any echelon of a calibrated force, to allow a unique level of training and mission readiness in order to protect the homeland and win the peace.

Everything in the city and surrounding property, including the people, is “in play.” Culturally authentic animals and role players can participate in exercise scenarios that are customized to user needs by subject matter experts (SMEs), who design foreign and domestic scenarios to replicate the most complex and dynamic multi-domain environments in which U.S. forces, DOD civilians and first responders operate. MUTC offers a robust and realistic electromagnetic environment, telecommunications infrastructure and a well-developed, closed network wireless environment.

MUTC employs a “network effect” operating model to generate two major values for the user: A highly realistic training/assessment environment at a cost-benefit ratio virtually impossible to achieve if attempted alone; and, the opportunity to collaborate as a “team of equals” with other agencies and entities that will be critical to mission success. Collaboration is effected while ensuring that each agency retains total control of its program. 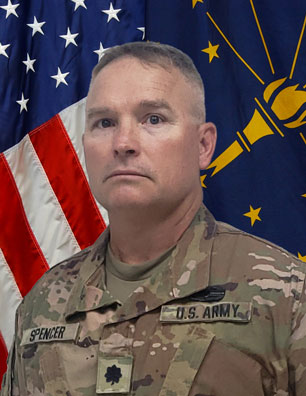 Lieutenant Colonel Stephen M. Spencer serves as the Commander of the 776th Brigade Engineer Battalion and the Director of the Muscatatuck Urban Training Center. Spencer enlisted into the U.S. Army in October, 2001. He completed Basic Training at Fort Jackson, South Carolina. He graduated from Officer Candidate School and was commissioned as an engineer officer. He graduated from Engineer Officer’s Basic Course at Fort Leonard Wood, Missouri, and completed Intermediate Level Education and Advanced Operations Course from the Command and General Staff College, Fort Leavenworth, Missouri.

Lt. Col. Spencer’s first assignment after basic training was with the 1313th Engineer Horizontal (HORZ) Company, where he served as a supply specialist. In August 2004, he received an Army commission to second lieutenant and was assigned to the 1313th as a platoon leader.

In July 2006 to September 2007, he deployed to Iraq with a platoon of engineers to support the 875th Combat Engineer Battalion (CMBT) out of Arkansas conducting route clearance operations. Upon redeployment he was assigned as Company Commander 1413th Vertical (VERT) Engineer Company. In June of 2009, he served as Troop Commander for HHT 2-152 Cavalry Squadron.

Following company command, in 2012 until May of 2016, Lt. Col. Spencer was assigned as the Engineer Operations Officer for the 38th Infantry Division. He then served as Battalion Executive Officer for the 776th Brigade Engineer Battalion, 76th Infantry Brigade Combat Team. In 2018, he was assigned to the 38th ID and deployed in the spring of 2019. Initially assigned as the Division engineer, Lt. Col. Spencer was tasked with serving as a base commander at Tower 22 in northern Jordan supporting Operations Spartan Shield and Inherent Resolve. Upon redeployment in April of 2020, he transitioned to 38th Infantry Division Chief of Protection.

Since 2009, Lt. Col. Spencer has served full-time in the Indiana National Guard. In early 2009, he accepted a position as a Project Officer at the Muscatatuck Urban Training Center (MUTC). Since 2012, Lt. Col. Spencer has served in other roles at MUTC, to include the engineer lead, operations officer, deputy base operations manager and Director, Muscatatuck Urban Training Center. 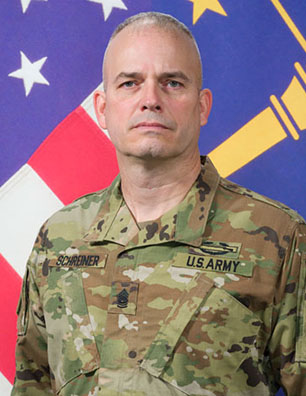 Command Sergeant Major Jason F. Schreiner enlisted as an infantryman in the Indiana Army National Guard on October 20, 1989, in Madison, Indiana. He attended basic and advanced individual training at Fort Benning, Georgia, and upon graduation was assigned to the 1-151st Infantry in Madison. His last assignment was as Command Sergeant Major for the 776th Brigade Engineer Battalion.

He holds a bachelor’s degree in Business Information Systems from Indiana Wesleyan University.