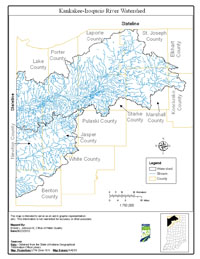 A comprehensive survey of the Kankakee/Iroquois River Watershed was conducted by Indiana Department of Environmental Management (IDEM) in 2008. The primary cause of impairment is Escherichia coli bacteria (E. coli). Pollution sources in the watershed include nonpoint sources from agriculture and pastures, land application of manure and urban and rural run-off, as well as point sources from straight pipe discharges, home sewage treatment system disposal and combined sewer overflow outlets.

TMDLs for the Kankakee/Iroquois River Watershed are established for E. coli and will address 80 impairments. Some of the recommended solutions to address the impairments include storm water controls, point source controls, manure management and habitat improvements.

Following approval, it was discovered that a facility had been included in the final TMDL report in error. As a result, IDEM made revisions to the report to remove the facility. A 30-day public comment period on the revised draft lasted from January 17, 2020 to February 17, 2020. U.S. EPA approved the revised TMDL report on March 27, 2020.