From the Vault Blog

From the Vault | Stories from the Archives 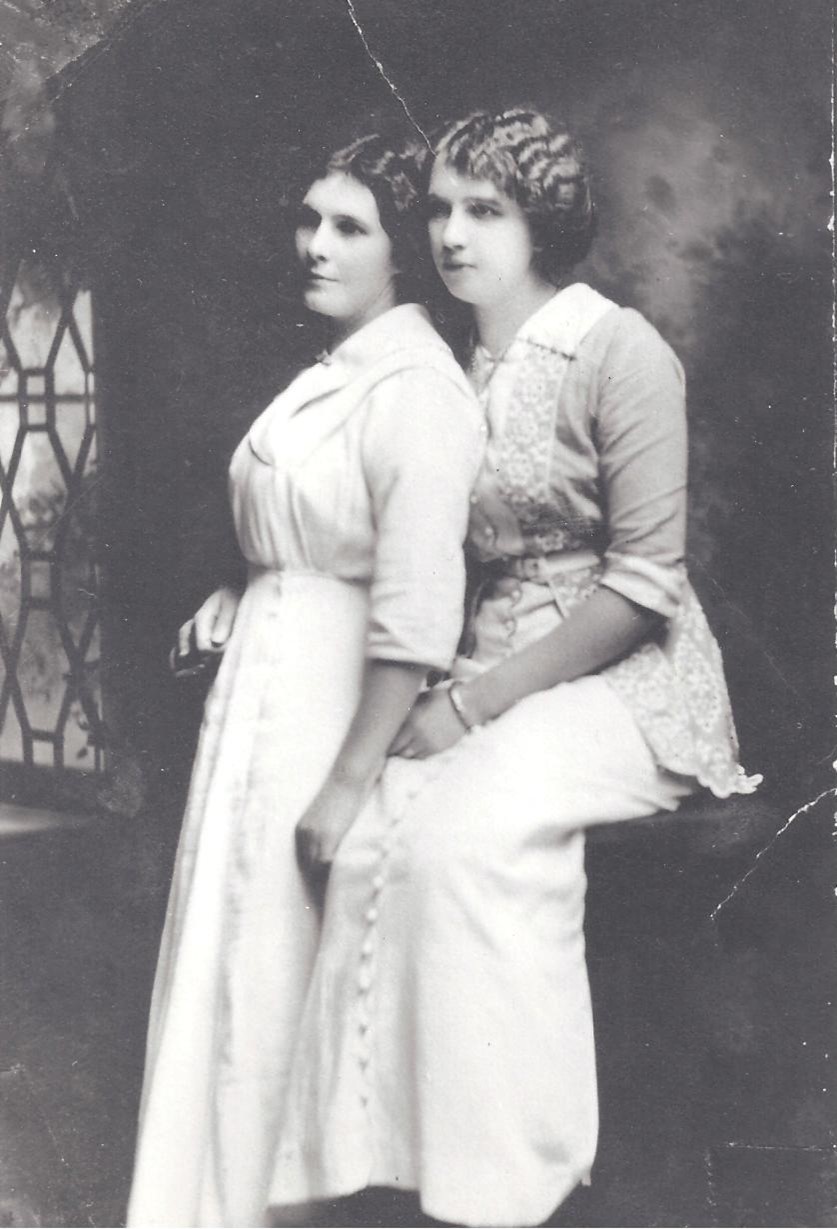 Open any box at the Indiana State Archives and you will almost certainly find an interesting story. Some collections naturally lend themselves to a greater likelihood of discovering a real page turner than others. Typically, collections that concentrate on individual people can always be counted on to be intriguing. A particular favorite for most genealogists is that of the Foster Care Files 1892-1910.

The Foster Care files, collected by the Children’s Home Society and the Board of State Charities Child Saving Department, pertain to the placement of children in foster homes throughout Indiana. The files vary in size containing as little as a few sentences on a scrap of paper, or filled with multiple home reports, letters from family members, and an occasional adoption paper.

To test the theory that one can open any box in this collection and find a great story, the first box was sampled. Naturally, thinking the larger files stood a better chance, a file for Lillian Clark was selected. Perusing the file reveals that little Lillian Clark was only three years old when she was taken in by the Children’s Home Society in 1893 in Henry County, Indiana.

Lillian was soon sent to live with Earl and Melissa Rector in Jefferson County, Indiana. The Rectors were both fifty-two years old at the time. Their children were grown and living elsewhere. Mrs. Rector was not in good health, and Mr. Rector was a former Civil War soldier, now living in the town of Faulkner, where he hoped to buy a farm. He wrote to Reverend H.S. Hilton of the Children’s Home Society that they would like to have a “a little girl from four to eight years old[,] an orphan preferred and that has not been spoiled[,] dark hair and eyes and healthy.” In another letter he emphasized they wanted a child they “can raise and treat as we would our own.” On November 4, 1893, Rector wrote, “we are very well pleased with her[.] she is a very smart child for one of her age[.] will know in two weeks if we want to keep her[.] don’t think we would like to part with her[.] Would like to know something about where she came from[.] if her parents are dead or alive and how old she is as near her age as possible.” The Rectors were thrilled with little Lillian, and eventually adopted her. She apparently lived happily with the family for nearly seven years. After Mrs. Rector passed away, Mr. Rector was at a loss as to what to do. He sent Lillian to live with one of his older children’s family, but they did not feel they could handle yet another child. Earl Rector remarried hoping to make a new home for Lillian, but that did not work out. His new wife could not get along with the little girl. Rector, now unemployed, feared he would be forced to go to the Soldier’s Home, if he did not find a job soon.

Lillian was returned to the Children’s Home Society on July 31, 1902, her young world once again upended. Eventually, she was placed with the Thompson family in Ladoga, Indiana.  Attorney R.C. Woods, who helped the Thompsons arrange to foster her, described her as “a lovely child, and appears to be of a contented cheerful disposition, and I am sure she is a very kindhearted little one.” According to the reports in her file, Lillian had a little trouble adjusting, but remained with the Thompsons  until she married in 1907.

A few years later, a woman named Mary Wagner Brittenham saw an article about two identical twin sisters who were reunited in Indianapolis after being separated as foster children. Inspired by the story, she wrote to J.L. Peetz of the Children's Home Society and explained that she was looking for her sister’s children. Mary's family had been separated when she was a child, and Mary, her brother, and her two nieces were all sent to different foster homes. Mary was sent to a home in Illinois and her brother Murray was sent to live with a farming family in Indiana.

Their experience was difficult. Unfortunately, Mary’s file has not been discovered in the Foster Care collection, but her brother Murray does have a small file. By today’s standards, Murray’s foster father would have been charged with abuse, and indeed the child was soon moved to a new home shortly after his foster father wrote to the agent that he beat him “like a mule” in order to gain any cooperation from him. Murray eventually also left the new home, returning to his mother who was then living in Knightstown, Indiana. Mary eventually also returned to their hometown and the siblings reunited with their father and older siblings. However, they were still unable to find their nieces.

Mary’s inquiry to Peetz named the two girls as Nellie and Florence Manlove. Though Agent Peetz could find a file for Nellie Manlove, he had no information as to her whereabouts.

Unfortunately, he could find no file for a Florence Manlove.  Peetz wondered if she might have been sent to the Children’s Home Society under a different last name. Mary remembered that for a short time her sister Mattie had been married to a man named Clark. Peetz found information regarding a Lillian Clark, whom he believed might be Florence. He found her married name in correspondence sent just before her marriage in 1907 to Nelson Howard.

Mary wrote to Lillian who was shocked to learn that her family was still living. According to a letter in the possession of her great-grandson, Lillian believed her parents had died and did not remember having siblings.  Lillian was soon reunited with both her aunt and her mother Mattie, now remarried to James Cavanaugh and living in Carthage, Indiana. 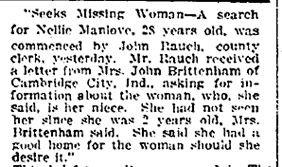 The reunion went well with Lillian frequently bringing her children from Lake County to visit her mother and aunt. Still, they all felt compelled to locate Nellie.  Over the next two years Lillian joined in the search sending letters to various organizations, including the State Board of Charities and Children’s Home Society. Both offices were attempting to make contacts.

Suddenly the mystery of Nellie’s whereabouts began to unravel. The women learned that Nellie had once lived in the home of a woman named Ida Black. After contacting the Marion County clerk, John Rauch, who took an interest in their search, a small article appeared in the Indianapolis Star describing the search for Nellie Manlove. The ad was spotted by Irene Black of the Humane Society who had formally worked at the Children’s Home Society in Indianapolis. She remembered Nellie well.

Around the same time, the Board of State Charities also discovered Nellie had married James Elliott in Indianapolis and they were presently living in the Carter Flats at Massachusetts Avenue and St. Clair Street.  Irene Webb called Nellie and explained the search her family was conducting. Nellie had only vague memories of family members whom she’d not been able to locate.

The family wasted little time reuniting, with Mary and her husband meeting with Nellie the same week. The Indianapolis Star and other central Indiana papers carried stories about their reunion. 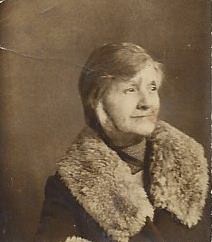 Mary wrote to J.A. Brown, the State Agent for the Child Saving Department at the Board of State Charities. “…she and husband have visited us in our home[,and] we visited them in there [sic] home [,and] will be here Thanksgiving.” Mary goes on to describe their lengthy separation, the relief evident in her writing. “Kind Sir[,] this will be the happiest thanksgiving to me.  I shall have both the nieces and my baby brother all with us for the first time since we were all separated and placed out in homes…”

She continues, thanking him for his help, “thank you for your kindness just the same[.] us children have saw hard times and mean treatment but never more.”

Sisters Nellie and Lillian reunited as well, even sitting for the portrait pictured at the beginning of this post. 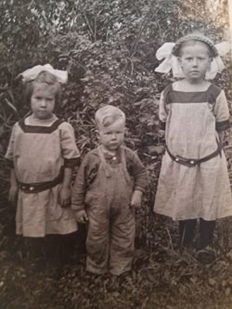 Though Thanksgiving 1913 proved to be a good year for the Manlove-Wagner family, the few short years that followed were not. Lillian gave birth the next year to her fourth child who died of pneumonia within a few weeks.  The Howards moved from Crown Point to New Castle, closer to her family, where Nelson worked as an engineer in an automotive plant.  In 1916, Lillian passed away due to pregnancy complications.

During her search for Nellie, she had written to J.A. Brown that she had “a good husband and three sweet little children two girls and a baby boy seven months old the 28th of July.”

All that from one file chosen at random, which led to two other children’s files in the same collection! With a little work we were able to track down one of Lillian’s descendants. Lillian’s great grandson, the grandson of her son James Melvin Howard, kindly loaned the images of Lillian and Nellie, Mary Brittenham, and Lillian’s children.