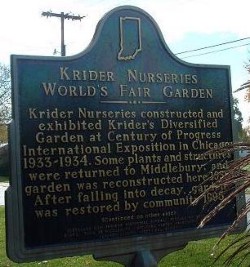 Krider Nurseries constructed and exhibited Krider's Diversified Garden at Century of Progress International Exposition in Chicago 1933-1934. Some plants and structures were returned to Middlebury, and garden was reconstructed here 1935. After falling into decay, garden was restored by community 1995.