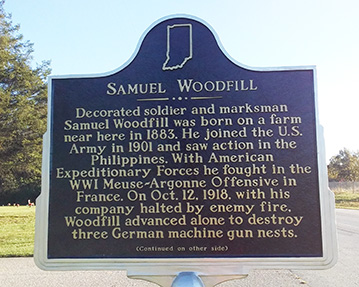 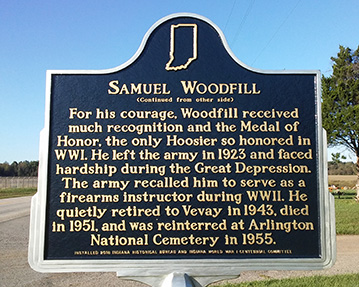 Decorated soldier and marksman Samuel Woodfill was born on a farm near here in 1883. He joined the U.S. Army in 1901 and saw action in the Philippines. With American Expeditionary Forces he fought in the WWI Meuse-Argonne Offensive in France. On Oct. 12, 1918, with his company halted by enemy fire, Woodfill advanced alone to destroy three German machine gun nests.

For his courage, Woodfill received much recognition and the Medal of Honor, the only Hoosier so honored in WWI. He left the army in 1923 and faced hardship during the Great Depression. The army recalled him to serve as a firearms instructor during WWII. He quietly retired to Vevay in 1943, died in 1951, and was reinterred at Arlington National Cemetery in 1955.