Secret Societies in Indiana during the Civil War

Secret political groups played a significant role in Indiana’s danger-fraught experience during the Civil War.  By the mid-nineteenth century, secret societies like the Freemasons, Oddfellows, and others featured prominently in male culture in the United States, as men joined oath-bound groups to socialize with like-minded men.  In the years before the war, secret associations with defined political goals and loosely modeled on familiar fraternal societies like the Freemasons emerged.  For example, the Know Nothings arose in the 1850s as an offshoot of the anti-immigrant American Party to promote a nativist agenda.  As the American Party assimilated into the Republican Party the Know Nothing movement subsided.

As well, the Knights of the Golden Circle (KGC) secret society, founded by a shadowy figure named George W.L. Bickley, arose in the mid-1850s to advance a filibustering agenda to spread slavery from the American South into Central and South America and the Caribbean.  The KGC attracted a large membership in the South and mobilized efforts to lead armed expeditions into Mexico and other states.  Newspaper reports from Southern cities described a widespread movement, but it evinced little or no support in the North.

During the secession crisis of 1860-1861 and the onset of war in 1861, evidence shows that the KGC evolved to support the Confederate political agenda of independence from the United States as well as the protection of slavery.  During the war the group recruited supporters in the North.  In Indiana and neighboring states, the effort tapped into the substantial minority of conservative Democrats who espoused state sovereignty views regarding the relationship between the federal government and the states, i.e., that a state could decide to separate from the federal union.  Tied to this outlook was the belief that Southern slave states should be allowed to decide for themselves whether or not to permit slavery. Consequently, members opposed a coercive war to restore the rebellious states to the union and opposed President Abraham Lincoln’s policies.  Federal and county grand jury investigations of the existence of the KGC in Indiana and neighboring states in the early months of the war pointed vaguely to the presence of the oath-bound organization.  But civil law enforcement authorities failed to counteract their influence. 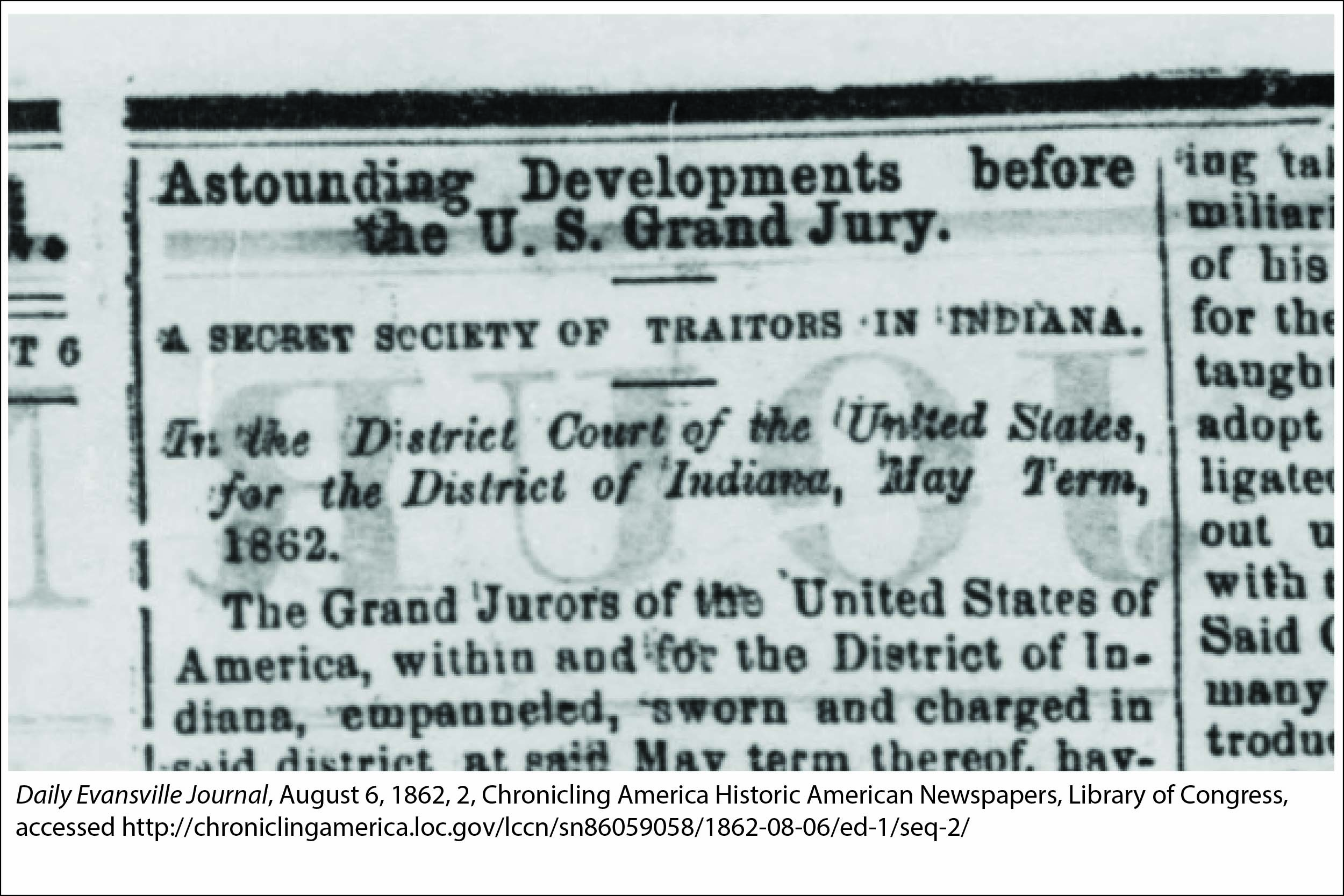 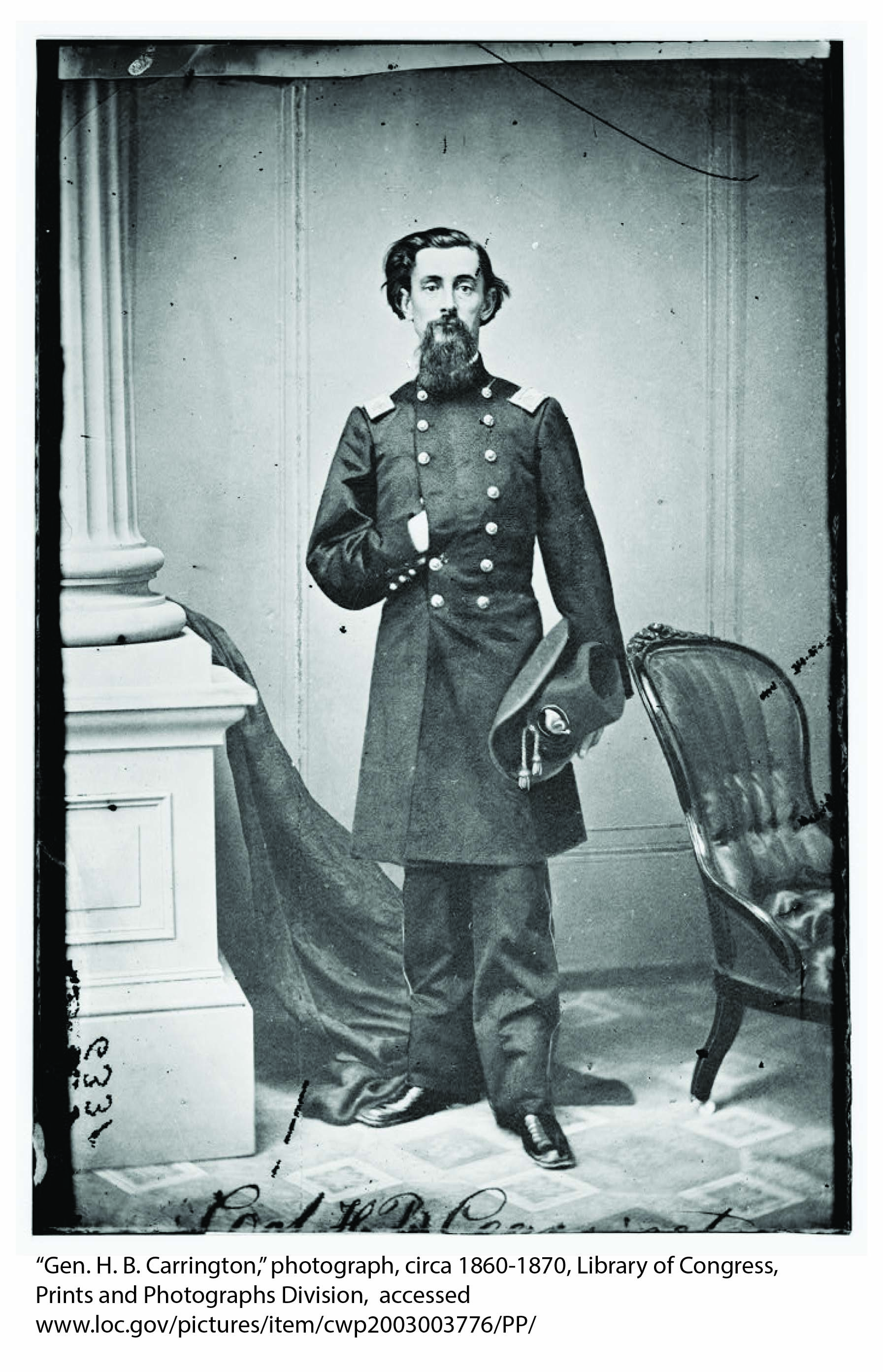 U.S. Army Colonel (later Brigadier General) Henry B. Carrington spearheaded a military investigation of the secret society in Indiana when, in December 1862, he discovered that soldiers in army camps around Indianapolis were members of a secret organization with various names but which shared modes of communication.  His investigations further revealed that the organization encouraged soldiers to desert the ranks.  After Congress passed an Enrollment Act in March 1863, Carrington and other military commanders learned that war opponents were secretly arming themselves to offer organized resistance to draft enrollments and to protect deserters and draft dodgers.  Troops sent to arrest deserters clashed with armed and organized groups; these groups obstructed enrollments in many places and shot dead, wounded, or otherwise intimidated enrollment officers.  During that spring, troops arrested hundreds of armed men, many of whom were convicted in federal courts for resistance to federal laws.  A number of those arrested confessed to membership in secret organizations.  In an effort to counteract their strong presence, U.S. Army commanders and Indiana Governor Oliver P. Morton, who believed that the conspirators planned to sever Midwestern states from New England to form a Northwestern Confederacy, worked together to expose the secret societies they believed were behind the violence.   In the summer of 1863 careful but sometimes stern military responses and public exposure of the existence of the KGC briefly quelled violent resistance in the state.

In 1863, opposition to the coercive war effort and Lincoln’s war policies grew in Indiana and neighboring states, largely in reaction to the protracted war and serious violations of civil liberties committed by Lincoln’s government and military forces.  As well, the president’s Emancipation Proclamation, declaring slaves free in areas of the South still in rebellion, enraged many conservatives in the North.  Starting in the summer of 1863, the KGC changed many of its outward trappings, including its name.  It first took on the name of the Order of American Knights (OAK), and later still, in 1864, the Sons of Liberty.  Nonetheless, its core beliefs of adherence to state sovereignty views and support for the right of the Southern states to secede and protect slavery remained.  Estimates of strength varied, but multiple informants reported approximately 100,000 members in Indiana in early 1864.  Beyond resistance to the draft and protection of deserters, organization leaders in Indiana and other Northern states established contact with Confederate leaders through secret channels and developed far-reaching plans to obstruct the federal war effort.

In the spring of 1864, U.S. Army spies managed to infiltrate the state leadership of the Sons of Liberty in Kentucky and Indiana.  This success allowed commanders to learn what the groups secretly planned.  However, army and political officials feared that arresting the leadership would provoke an uprising at a time when there were few troops on hand.  Army spies later reported that Confederate forces and Indiana conspirators together planned to foment an uprising and attack Camp Morton prisoner-of-war camp in Indianapolis to release thousands of Confederate soldiers.  In addition, in August an informant revealed that a large shipment of arms and ammunition had been sent to Indiana Sons of Liberty leader Harrison H. Dodd of Indianapolis, a prominent Democrat in the city.  Troops seized the cache in Indianapolis, as well as a second batch in New York City awaiting shipment to Indianapolis.  Troops later arrested Dodd and several other members of the state Sons of Liberty leadership (most of whom were prominent Democrats in the state), including William M. Harrison, Stephen Horsey, Joseph J. Bingham, Horace Heffren, William A. Bowles, Andrew Humphreys, and Lambdin P. Milligan.

Acting on orders from Washington, D.C. officials, Indianapolis commanders tried the prisoners by a military commission for conspiracy and disloyalty.  The commission found four of the prisoners guilty and sentenced three of them to death.  The trials coincided with state and federal elections in the fall of 1864.  Authorities allowed the trial proceedings to be published, which revealed the development of plans for violent overthrow of state and federal governments.  An alarmed voting public turned out for incumbent Republicans Lincoln and Morton.  Military forces later foiled a similar plot to attack Camp Douglas prisoner-of-war camp in Chicago, Illinois, and a subsequent military commission trial further revealed the history and workings of the secret organizations. By this time and as the rebels surrendered in the spring of 1865, the secret societies had been thoroughly exposed and ceased to be a significant threat to the United States.

For their part, wartime Republicans also established secret organizations to advance their political agenda.  In 1862 and 1863, in response to the rise of secret societies allied to the Democratic Party that opposed Lincoln administration’s war measures, Republicans created their own secret groups to combat the threat of the KGC. Called variously the Loyal or Union Leagues, the groups obtained support from the Republican or Union governors in office in the Midwestern states.  In Illinois, Republican Governor Richard Yates armed the local Union League groups to form a politically-reliable militia.  Fortunate to have an operable state militia law, Governor Morton of Indiana did not go to that extreme.  At the local level, however, animosity between the Democratic and Republican societies was sometimes bloody.

Anbinder, Tyler. Nativism and Slavery:  The Northern Know Nothings and the Politics of the 1850s (New York:  Oxford University Press, 1992).