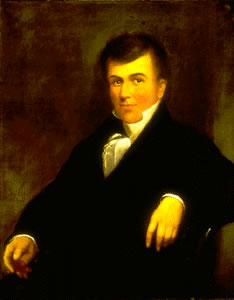 JONATHAN JENNINGS, Indiana's first state governor, was a minister's son, born in New Jersey and educated in the common schools of Pennsylvania. Like most of his successors in the governor's chair, Jennings was a lawyer.

He was elected as territorial delegate to Congress in 1809, 1811,1812, and 1814, and served as president of the convention called to frame a constitution for the new state of Indiana. His politics were of a personal rather than a party nature. Jennings was elected governor in 1816, handily defeating the incumbent territorial governor, Thomas Posey. He served two terms, leaving office in 1822 after his election to Congress, to which he was re-elected in 1824, 1826, and 1828. He also served on commissions in 1818 and 1832 to negotiate treaties with the Potawatomi, Wea, and Miami Indians. Indiana historian William Wesley Woollen says that Jennings lost his seat in Congress in 1830 because his friends were concerned about his drinking problem, believing that life in Washington tended to increase Jennings' dependence on alcohol.

Jennings had blue eyes, a fair complexion, and sandy hair. He was about five feet eight and one-half inches tall, and later in his life he tended to corpulence. Woollen describes Jennings as "a man of polished manners. . . he was always gentle and kind to those about him. He was not an orator, but he could tell what he knew in a pleasing way. He wrote well, as well perhaps as any of his successors in the Governor's office."