What does the Indiana State Seal mean? 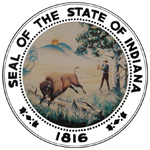 Versions of the pioneer scene have been used on Indiana seals since territorial days. They are found on official papers as early as 1801. Both the 1816 and 1851 Constitutions provided for a seal to be kept for "official purposes." The 1963 Indiana General Assembly gave legal sanction to the design and provided an official description:

At the bottom center, 1816, flanked on either side by a diamond, with two dots and a leaf of the tulip tree [the state tree], at both ends of the diamond. The inner circle has two trees in the left background, three hills in the center background with nearly a full sun setting behind and between the first and second hill from the left.

There are fourteen rays from the sun, starting with two short ones on the left, the third being longer and then alternating, short and long. There are two sycamore trees on the right, the larger one being nearer the center and having a notch cut nearly halfway through, from the left side, a short distance above the ground. The woodsman is wearing a hat and holding his ax nearly perpendicular on his right. The ax blade is turned away from him and is even with his hat.

The buffalo is in the foreground, facing to the left of front. His tail is up, front feet on the ground with back feet in the air -- as he jumps over a log.

The ground has shoots of bluegrass, in the area of the buffalo and woodsman."