Story - A Role Model for Tenderness and Compassion 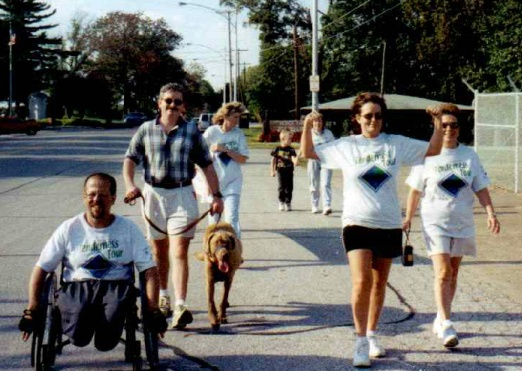 When Richard Propes says to a client “I understand what you are going through,” he truly does.

In 1965 he was born with a severe form of spina bifida, in a small, ill-equipped hospital. No one expected Richard to survive. Then, as a young child, Richard endured both violence and sexual abuse by people who were supposed to be friends and caregivers. To add to his already fragile health situation, poor self-care led to the amputation of both of his feet just below his knees due to severe infections.

For years after, he struggled to find his identity. At his lowest points he was homeless and suicidal. Fortunately, out of his own tribulations, Richard not only turned his life around but went on to bring hope and make a difference in the lives of others in Indiana and around the world.

A turning point in his life came when he decided to see for himself if there was any tenderness in the world. He started what he called the “Tenderness Tour” by doing a 41-day, 1,000 mile wheelchair ride around the border of Indiana. He came home realizing he had a purpose in his life, “to reach the unreachable, touch the untouchable and to find a way to love those who believe themselves to be unlovable.”

Following that first Tenderness Tour, Richard went back to school and graduated with a 4.0 G.P.A. from Martin University with a bachelor’s degree in counseling psychology. Richard continued his charitable work while finding employment at a hospital. While working in a hospital setting, he found he really had a passion for working with people with disabilities. For the past six years, Richard has worked for the Division of Disability and Rehabilitation Services and is currently a program director in the personal allocation review unit.

Now in its 25th year, Richard recently announced that his Tenderness Tour, in partnership with the New Community Project, has committed to raising the funds necessary to build a multi-purpose center in the community of Narus in South Sudan. This center will meet the needs of young girls who’ve dropped out of school after getting pregnant; provide literacy and skills training for women, including those with disabilities, along with workshops on hygiene and sanitation.

To supplement his Tenderness Tours, Richard became the executive producer of a music CD. On the CD, 19 artists celebrate life and love, hope and healing across the genres of folk, Americana, rock, alt-country, contemporary Christian, alternative, indie, adult contemporary and ‘70s groove. The CD is available online at www.cdbaby.com/cd/tendernesstour.

A self-proclaimed workaholic, Richard is a pastor who does side work with theater and independent films. In his spare time, Richard is also a writer. His first autobiographical book, "The Hallelujah Life," is available through Amazon and most retail outlets online. His second, yet-to-be-titled book, is soon to be released.

Whether he is working with his DDRS clients or helping victims of abuse at a charity function, Richard is compassionate and caring. Nominated for the newsletter by a co-worker, he was honored to be considered an inspiration for his service and volunteerism and says his challenge to others is this, “Give. Give of yourself. Life is always better when you’re serving others.”