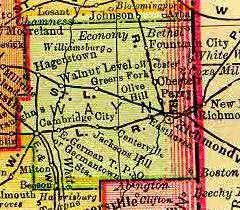 Wayne County, located along the Ohio border in Eastern Indiana, was named after Revolutionary War General "Mad" Anthony Wayne. The county was formed in 1810 and Salisbury was named the county seat because Richmond was too far removed from the county center. Wayne County was a prosperous farming community and its commercial success increased greatly after the Whitewater Canal project which connected Lawrenceburg to the National Road in the north by 1845. Wayne County housed many abolitionist societies and Newport, present day Fountain City, became an important stop along the Underground Railroad. Levi Coffin was known to be conductor for the Railroad and he is estimated to have helped over 3,000 slaves flee to the north. 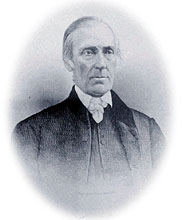 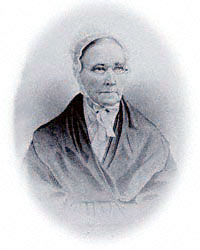 Probably the most renowned of the UGRR conductors, Levi Coffin worked tirelessly to aid fugitives towards freedom. Along with his wife Catharine, he moved to Wayne County in the 1820s. The Federal style brick home was built in 1839. The house is a National Historic Landmark, is listed in the National Register of Historic Places, and is listed in the National Underground Railroad Network to Freedom. When the Coffins first moved to Wayne County, there was an already active Underground Railroad operation working. The Coffins tapped into this movement and continued the work. During the 20 years they lived in Newport, the Coffins helped more than 2,000 slaves reach safety.

The Escape of Peter

Samuel Todd of Kentucky sued William Bulla and Andrew Hoover, both from Wayne County, Indiana, each for $500.00 for loss of property. Todd accused the men of helping his slave Peter escape. Peter fled Kentucky in August of 1821 and came to Indiana. While Peter had left in 1821, we are not certain how long he had been living in Wayne County. By the time he was found just north of Richmond, he had changed his name to George Stellow. In the spring of 1825, Todd sent two agents to Wayne County to claim Peter and by June 18, 1825, John Millekin (agent for Samuel Todd) had arrested Peter in Wayne County. Millekin then went to the Justice of the Peace, asking him to approve Peter’s removal back to Kentucky. While at the Justice of the Peace, a group of people broke Peter out of jail with “bodily force and violence” and with full knowledge of Todd’s rights as a plaintiff.

After the breakout, Peter was gone. With no other recourse, Todd sued Bulla and Hoover for the loss of property. With no witness testimony or evidence surviving, the only certainty is that Todd won both cases. The judge ordered both men to pay the plaintiff to recover his own debt and costs, a total of $1,500.00. Little is known about the main individual in this story, Peter. Because he had changed his name at least one time, it becomes increasingly more difficult to determine what happened to him. While Peter’s story will go mainly unknown, we do have a brief snippet of his life through the trial. How he got to Richmond, why he chose to remain there, or what his life was like before or after the escape is unknown. Living in a state where individuals had mixed views over slavery and the right of African Americans to live in Indiana, Peter found a place that offered both help and betrayal.