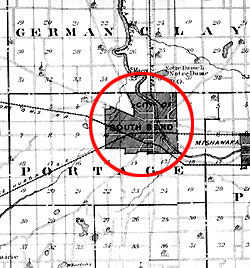 In the 1840s and 1850s, South Bend, located in the far north of Indiana along the Michigan border, often served as a last stop for escaping slaves in the Hoosier State. Local abolitionists, including Thomas Bulla and Solomon Palmer, helped runaway slaves travel northward to freedom through South Bend. In 1849, several local citizens prevented a Kentucky slave owner from recapturing his runaway slaves in South Bend instigating a noteworthy legal battle. The local court supported the South Bend citizens and refused to return the slaves, however, the slave owner later sued and won a cash award for the loss of his property.

The Bartlett home in South Bend was never used as a "station" on the Underground Railroad, but was vital to the workings of the network. The owners raised funds to purchase clothes, buy food, and offer bribes as needed to ensure the safe passage of enslaved African-Americans. The Bartletts also owned a barber shop in downtown Fort Wayne, where an African-American barber worked and reportedly kept information about the Underground Railroad flowing.

The Bulla Farmhouse, north of South Bend, on the campus of Notre Dame was an Underground Railroad station. There are several family accounts that detail events around 1856. In addition to Bulla’s work, his father and grandfather were found guilty in 1825 in Richmond, Indiana for “lost of property” in a case related to the escape of a fugitive from Kentucky named Peter.