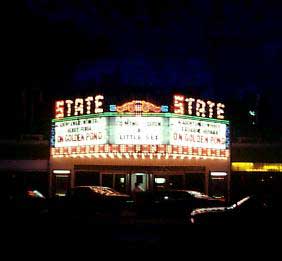 Every downtown had one. It was the grand old opera house or the movie palace built in the bustle of the city center. In the late 1800s and the early 1900s, these venues served as the heart of entertainment in most communities. Such theaters were great places for first dates or for catching the newest flick. Sadly, these historic treasures have begun to fade away. The creation of “talkies” signaled the demise of opera houses. Single screen theaters, unable to compete with the multi-screen, big box theaters have ceased their cinemagraphic functions, becoming venues for other uses. In many cases, owners have stripped the equipment, leaving just the shell of a building.

Despite our fascination with cars, even the drive-in theaters have largely been unable to survive. Consequently, the last quarter of the twentieth century has witnessed the endangerment of these theaters that were once a staple of our society.

Everyone is familiar with one or two endangered theaters in their hometowns. But exactly how many were there? How many are left? What is their condition? The completed survey to determine what the state once had can be found on our online database SHAARD.

A part of the SHAARD database are historic photos taken by two lovers of old Theaters, Gene Gladson and Stanly Griffith. Gene’s love for entertainment started early on in his life. Gene’s crusade to save theatres throughout Indiana is more than likely the reasons there are some left today. Gene did research on each and every theatre that ever stood in Indiana - he traveled the state taking photos, which his family has donated to the DHPA.

Stanley Griffith grew up with the movie theater. He started working at the Tivoli(in Seymour) in 1960, when his father got him a job. Stanley worked his way up, until he was skilled and knowledgeable as a projectionist. At this time, he also worked as a projectionist for the Record’s Drive-in. He left the Tivoli in 1967. He moved to Bloomington, where he started working at the Princess Theater in 1969 as the projectionist. In 2006, Stanley allowed the Division of Historic Preservation and Archaeology to scan his photo collection.

We hope that through this project leaders in the preservation community will partner with owners of these historic resources to help preserve the heart and culture of our downtowns. If you are interested in participating in the Historic Theater Initiative, or to make sure we have your favorite venue on our list, contact DHPA at 317-232-1646.